Most electronics DIY projects I’ve worked in the past have involved digital communication protocols such as USB, UART or PS/2. Sometimes when first twiddling with a new protocols, everything works nicely. Other times, things don’t quite work the way they should. In the latter case, a logic analyzer is an invaluable tool, essentially a multi-channel logger of digital signals, which you can use to hopefully pinpoint where things are not going as they should. Nowadays most of these are connected to PC, so you can capture a piece of communications between two devices, and analyze what is happening with a dedicated software.

I started my logic analysis with the inexpensive Bus Pirate, but after a while also got Saleae Logic unit I used to view the PS/2 traffic in my knock sensor project. Later on, I have gotten the PicoScope 2208B which has both analog oscilloscope functionality, as well as digital logic analysis capabilities.

So when I was contacted by IKALOGIC, the makers of ScanaQuad series of logic analyzers, who offered to send me a unit to try out in return for a review, I though I was in a good position to give it a spin and also have previous experience to compare it against. I also had a project in mind to test drive the SQ200 unit I got: my recent MIDI-USB adapter, which is a combination of slow 32 KHz serial signals, and quite fast USB signalling.

Note: I received the review unit from Ikalogic without cost, but with freedom to form my own opinion about the device. I’m giving praise where it’s due, but not pulling any punches where something will nag me or compare unfavorably against the devices I’ve had first-hand experience in the past! 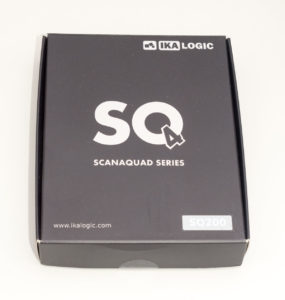 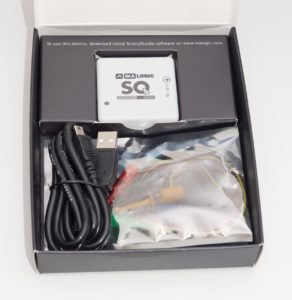 The unit arrived well packaged, and inside the plastic wrapping I uncovered a matte black cardboard box with the unit name. A grade above no-name Chinese vendors, but of course not an iPhone “unwrapping ceremony” kind of thing either. Inside, there was the unit, USB cord and logic probes neatly packed (click for larger images).

There’s nothing complicated in taking the unit into use: Just attach the USB cable, the probes, and you’re set. Build quality of the unit is very good, with grey matte surface with nice finishing, four screws and a product spec sticker on the backside, and logo, markings and a power/activity LED on top.

Size-wise, the SQ200 is slightly larger than the very compact Logic unit I have from Saleae (it’s an old model, don’t recall the exact model code), which I rate as the gold standard in product casing, with Apple-esque metal feel (aluminum?) and solid construction. The Saleae unit actually has 8 channels despite it’s smaller size. On the comparison image you can also see PicoScope 2208B with 16-channel MSO capability. Compared to that, both IKALOGIC and Saleae units are quity tiny (still, the palm-sized 2208B is extremely compact as well, given the 2 high frequency analog channels and waveform generator).

This article will detail how to build a USB MIDI adapter (one-directional: you connect the adapter with USB cable to your computer, and it receives notes and pedal data from your keyboard’s MIDI OUT and transmits them to your computer) with ATmega32u4, 6N137 optocoupler, a few resistors and spare MIDI connector or cable. Read on for details!

Last year I wrote how you can turn Teensy LC into an inexpensive USB MIDI adapter. I used it to replace a non-working Chinese MIDI-USB adapter that did not send controller messages (i.e. piano pedal) properly to PC.

However, since the Teensy still costs $12, and you have to get some additional components, it doesn’t make sense to use it in a dedicated MIDI adapter, since you can get a working USB MIDI adapter for around $15 from Thomann and probably many other places.

But how about other boards? After making my Teensy LC adapter, I actually tinkered with Adafruit Pro Trinket, and got that working as well (the standard Trinket does not have hardware UART so V-USB and software UART is somewhat risky). But there is even a better board for this: The ATmega32u4 board I previously showed how it can be made into USB HID mouse. Let’s see how to turn it into a USB MIDI adapter!

To build this, you will need roughly $5.40 worth of components:

In my previous post I showed how to use Raspberry Pi to automatically record MIDI files from digital piano whenever you turn it on. However, if you sit down and play for an hour, and get one big MIDI file, it is not very useful. So what to do?

Pianoteq has a feature that splits your playing session based on breaks you take between playing notes. So I decided to mimick this feature with a simple Python script that:

I first thought to learn enough of MIDI file format to do everything from scratch, but there’s quite a bit of small details to handle, so in the end I decided to use an external toolkit from Craig Stuart Sapp called midifile to do the heavy lifting. You should be able to just clone the Git repo and make it with Raspberry Pi:

You should now have two useful commands in ~/midifile/bin: toascii to read a MIDI file and dump an ASCII (text) version of it, and tobinary to do the reverse. With Python’s Popen and smart piping, we can read and write the binary MIDI files as they were in this text format. You can check out how the format looks like with some MIDI file you have:

Here’s a sample of a MIDI file recorded by arecordmidi (I added the note in square brackets):

There’s some header data in the beginning, and each MIDI event is comprised of a deltatime field starting with ‘v’, and then fairly standard MIDI events in straightforward syntax. I hardcoded my program to expect single track which starts with tempo and speed data (ff 51 and ff 58 lines) which I use to calculate how many deltatime units is one second. I copy this header part to start of every MIDI file, and append the final “ff 2f v0” (END TRACK) event to the end. Here’s the full code:

During my summer holidays I got an interesting idea: Pianoteq has a very nice feature of “always on MIDI logging” that saves everything you play on your keyboard while Pianoteq was on. I’ve previously made some MIDI projects and had a great idea:

How about building a small device that records everything I play on my piano, and save it as MIDI files?

This would enable me to later grab a good performance, and eliminate the “recording anxiety” I get if I know I’m recording and should definitely not do any mistakes during the next 1000+ notes. Furthermore, even with easy MIDI recording to USB stick, it’s still several manual steps plugging the memory stick in, starting recording, stopping it, lugging it to a computer, etc.

My first idea was to use some WLAN-enabled embedded device, but MIDI IN would require optoisolators and some custom electronics, and more modern digital pianos often come with only USB MIDI, so it could easily become an exercise in communication protocols. Fast forward a couple of minutes to my next revelation:

Raspberry Pi Model 0 W already has USB and WLAN, and it’s small. Why not use that?

Turns out using a RaspPi as fully automated MIDI logger is really easy. Read on for instructions!

Turns out recording MIDI from a USB MIDI enabled device is really easy. When I plug in my Kawai CS-11 (sorry for the unsolicited link, I love my CS11 :) to the Pi (or just turn it on when it’s plugged in), dmesg shows that the Pi automatically notices the new MIDI device:

Once the USB MIDI device is found, you can use arecordmidi -l to list available MIDI ports:

There are few tools that are essential for an electronics hobbyist. When I started, I had a soldering iron, a multimeter and some components, and that was about it. That got me quite far because you can do simple debugging even with a multimeter, but once you start to do any communications, you will either work in the dark or get a signal analyzer, oscilloscope, or both. I reached that point about 9 months into my hobby, and eventually decided to get an entry-level PicoScope from Picotech. You can read the whole story from my PicoScope 2204 review from four years ago.

Long story short, I was extremely happy with my Picoscope, and I’ve been using Picotech’s products ever since in various projects. In the past years, I’ve also been collaborating with Picotech, so I’ve had the chance to use also their higher end models, including the frighteningly powerful 4-channel, 200 MHz, 16 bit PicoScope 5444B, which is really great but maybe even too hefty for my use. So when I was offered the chance to try out Picotech’s latest generation of their entry-level 2000 series published just a month ago, I was immediately in.

Without further ado, let’s get reviewing!

Biggest limitation with 2204 and 2205 models is the buffer size, which ranges from 8 kS to 48 kS, so for longer captures than a few waveforms, only option is the continuous capture over USB which worked at a steady rate of 1 MS/s the last time I used it. So you can do unlimited capturing of signals around 100 kHz, but above that it’s the normal oscilloscope triggering business — that’s the way scopes have always worked from their beginnings, so it gets the job done as well.

Picotech launched a new set of very compact but powerful 2000 series oscilloscopes just a few weeks ago, and with my long-term collaboration with them (they really rock :) they were kind enough to send me a unit for reviewing! The review will hopefully come quite soon, but meanwhile, enjoy this amazing unboxing video. And with “amazing”, I mean “I did not completely fail the lighting and achieved 90 % intelligible pronunciation”.

The unit in question is the high-spec 100 MHz 2208B with 16 channel logic analyzer unit built in. I knew that this replacement line to the old light blue 2000 series scopes was small, but I was still amazed by the compactness of this beast. Having had a top end 5000 series Picoscope for a few years, I’m seriously considering the “downgrade”, as I mostly use just one or two channels of the scope, and even those are in many cases digital signals. But I’ll return to this in the review later.

Let me know what you think, either here on in the Youtube comments section!