I started writing another blog post about my new keyboard today, and when uploading the unboxing video to my YouTube channel, I realized they have no “auto white balance” option, not in their new or old video editor either. Shoot. After googling for free video editors, I settled on OpenShot.

And guess what? OpenShot doesn’t have a white balance setting either! The author himself said this on Reddit, asking for help to implement it. I was pretty shocked, as it seems like the first filter I would implement myself, and thought “surely it doesn’t take more than five minutes to implement one, right?”. So I did. Well, it took maybe 15 minutes, plus 45 fiddling with Jupyter notebooks to get PIL and numpy commands right.

The Python 3 code above basically loads an image (either local if you run it with Jupyter notebook locally, or over network), get a small subportion of it to act as a grey reference, and adjusts color channel balance with two alternate methods: RGB or YCbCr. More advanced versions should be easy to add as well.

You can view the above gist in Github or just copy-paste the code to your own / cloud based notebook to try it out:

If you don’t have access to anything that can run a ipynb file, you can just take a look at the PDF version of a sample run. Enjoy!

Visit to the Official Raspberry Pi Store in Cambridge

Two weeks ago I had the chance to visit the official Raspberry Pi store in Cambridge. Apart from those living in the UK, I think not many will it that far, so I thought to share my pictures from the visit for you to enjoy (and maybe evaluate whether it’s worth the trip). Enjoy!

The Raspberry Pi Store is located in the Grand Arcade shopping mall, and on the second floor. Looks nice and official. 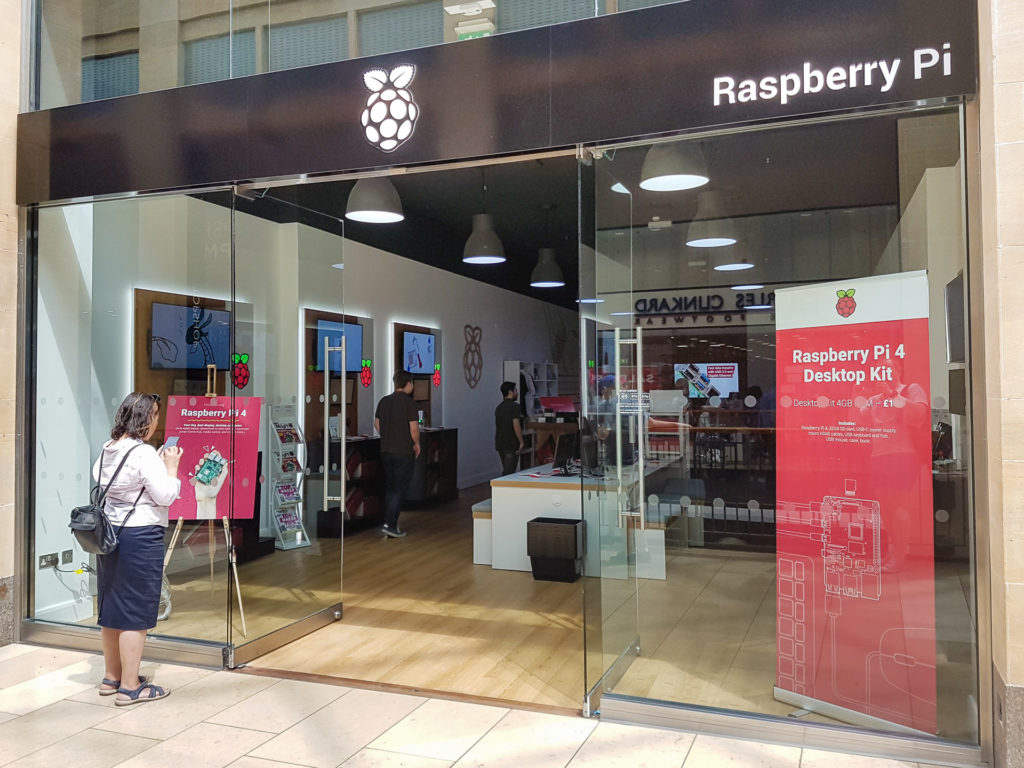 Naturally, it houses an excellent selection of the Pi boards. There was 3B-, 3A2, Zero, Zero W, Zero W+, compute modules, Pi 4 of course (with different memory options), all with good availability. To cheapest Zero boards were limited to 1 per customer, much like in web store. All boards had a good choice of cases as well on sale. Very nice. 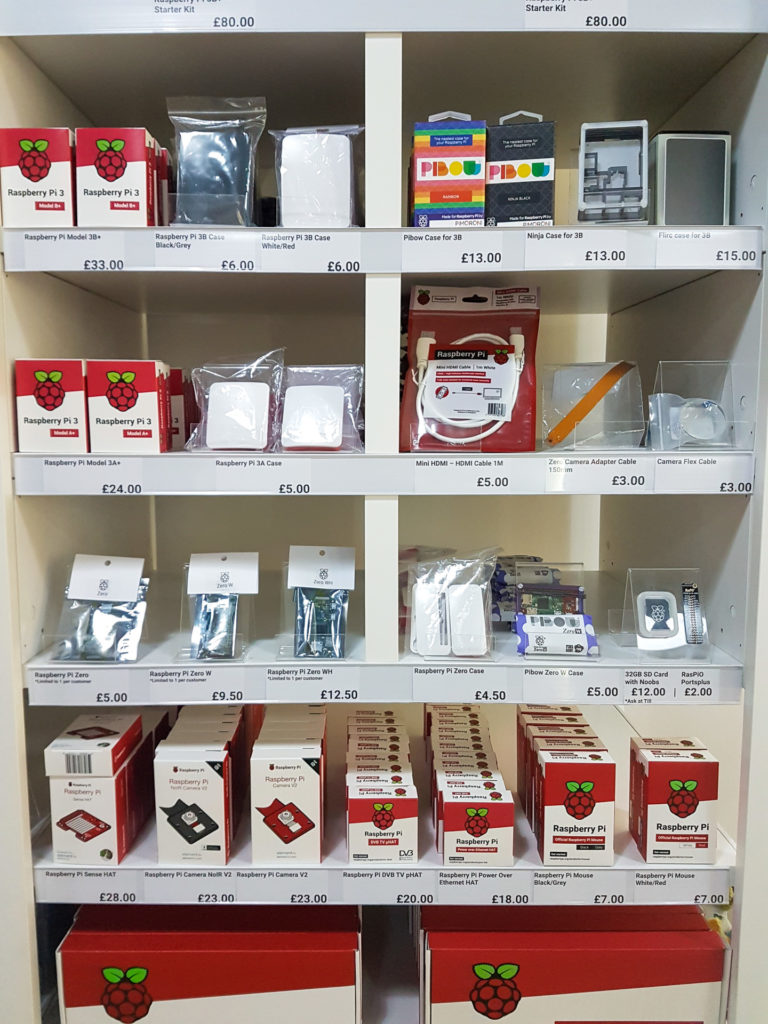 Power up your computer wirelessly with Wemos D1 mini

Tired of reaching for that power button? Or perhaps you’d like to be able to turn on your PC when travelling? I sometimes like to do that to access some local files (or software via VNC), but dislike leaving the PC on for days “just in case”. This article explains how you can do it with the $3.50 Wemos D1 mini.

Wake-on-LAN is of course a great idea, but it only works if your PC is physically wired to the router. Wake-on-WLAN theoretically should work for WLAN as well, but here’s a shocking revelation: it usually does not, as it requires your PC to power up your WLAN card for it to receive the magic WLAN packet, and router support. At least I’ve never had a combination of network card and router that would work.

I used to have a nice DIY knock-sensor to PS/2 thingy, but the piezo kept dropping out, and got tired of repeating the required sequence of knocks. So I thought it would be cooler to have just a Bluetooth button I could use to do the same. I had a WLAN enabled Wemos D1 mini board lying around, and it only draws less than 100 mA of power, so I thought to find out if I could make it listen to a “magic packet” and boot up my PC. Turns out it was easier than I even thought!

Note that this project involves opening your PC case and playing around with your motherboard power switch wiring. Everything should be relatively hard to screw up, but if done wrong, you may get electrocuted, you may stick a screwdriver where it shouldn’t go and damage your motherboard or other components, so proceed with your own risk!

Solid Angles of Planets and Which Planet to Use to Build a Dyson Sphere?

Time for something completely different from my usual electronics projects. This morning I started to wonder (don’t ask why) a couple of fundamental questions:

The thought experiment initiated from some Science podcast, probably from Anatomy of Next scientist interviews (or BBC’s Tomorrow’s World), which talked about turning Mercury into solar panels or mirrors — essentially a Dyson Swarm.

Mercury is close to sun, so it’s a clear candidate, but I started thinking “If you were an alien (or future human race) with super advanced technology arriving to solar system, which planet would you pick?”. You could of course harvest gas giants for Helium-3 and use fusion energy to do stuff, or have some not-yet-invented energy source. But let’s focus on the giant fusion reactor in the center of our solar system, and look at some numbers.

If we think of sun as a perfect sphere putting out energy in form of solar radiation to pretty much uniformly to all directions, the amount of radiation reaching a certain planet is a simple function of the planet’s radius and it’s distance from sun (π*r^2 / d). Surely you can quickly google which planet gets the most radiation? Turns out most articles on the internet for laymen focus on energy per unit of area (square feet or meters), and leave out the size of the planet completely. Well, easy to fix! Let’s start with some basic data from NASA’s planetary factsheet:

How Big Do Planets Look From The Sun?

Now as all planets are really far away from the sun compared to their radius and diameter, I’m just doing a shortcut and calculating their angle from sun as just the ratio of diameter and distance, owing to the fact that sin(x) ≈ x for very small values of x (second coefficient of Taylor series expansion is x^3/9 so with these numbers we’ll get about 20 significant digits correct). Calculating diameter/distance shows that even the largest planet from the sun, Jupiter, is just 184 microradians, that is 0.000184 radians wide when viewed from the sun! Full sky would be 3.14 radians, so there’s some way to go!

You could get an excellent Bluetooth keyboard controller from Adafruit called Bluefruit EZ-Key which allowed super easy creation of projects that sent keyboard presses (for example a gamepad) just by connecting some switches to the pins. However, the EZ-Key cost $20 and is now discontinued. And in any case, Bluetooth-capable devboards are now available from AliExpress for a few dollars, so $20 today feels on the steep side. “Could it be done cheaper?” I wondered…

I have honestly about a dozen cheap wireless devboards lying around, many based on ESP8266 which only have Wi-Fi, but some also with ESP32 which includes Bluetooth. I spent some time trying to configure a Chinese ZS-040 serial Bluetooth module to function as a keyboard, but the AT command set was a very small subset of what the similar HC-05 / HC-06 modules have. After an evening of trying, I decided to give up on that. There are instructions how to flash HC-05 modules with RN-42 firmware to get Bluetooth HID capability, but it will require quite a few steps.

I also took a look at esp32_mouse_keyboard project, but for some reason or another, abandoned that avenue. Don’t recall if there were obstacles or the project was still incomplete a year ago, might also be that the ESP32 only had BT LE which technically didn’t support HID (Human Interface Device). Throw me a comment if you have that working!

Meanwhile, another idea dawned to me:

A Cheap Bluetooth Keyboard Must Contain A Bluetooth Module 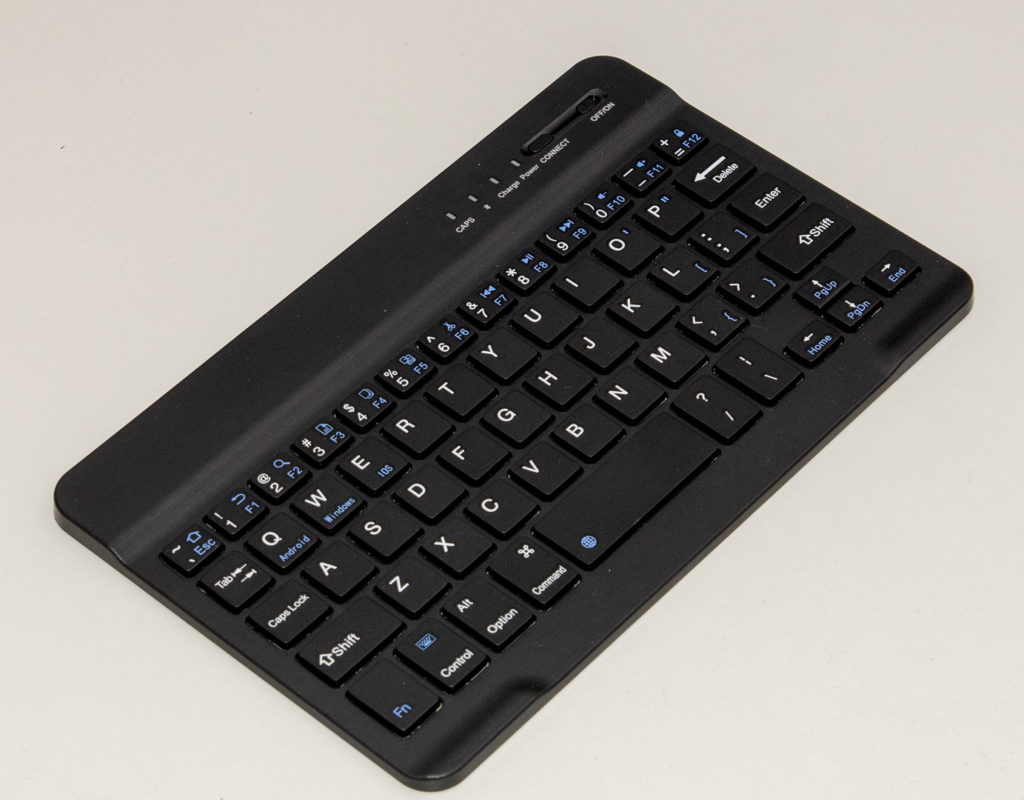 Enter the wonders of AliExpress: While you cannot source an easy BT keyboard module from US under $20, you can get a full mini Bluetooth keyboard for $9.50 (at time of writing) including postage! This package ought to contain:

Sounds a too good deal to be true? Well, let’s find out! The keyboard has a solid metal backplate that is easily screwed open with micro cross head screwdriver. Once inside, it reveals a very professional layout with a flat ribbon cable (or “FCC cable”) coming from the mechanical part into the controller module, And a small (most likely LiPo) battery. 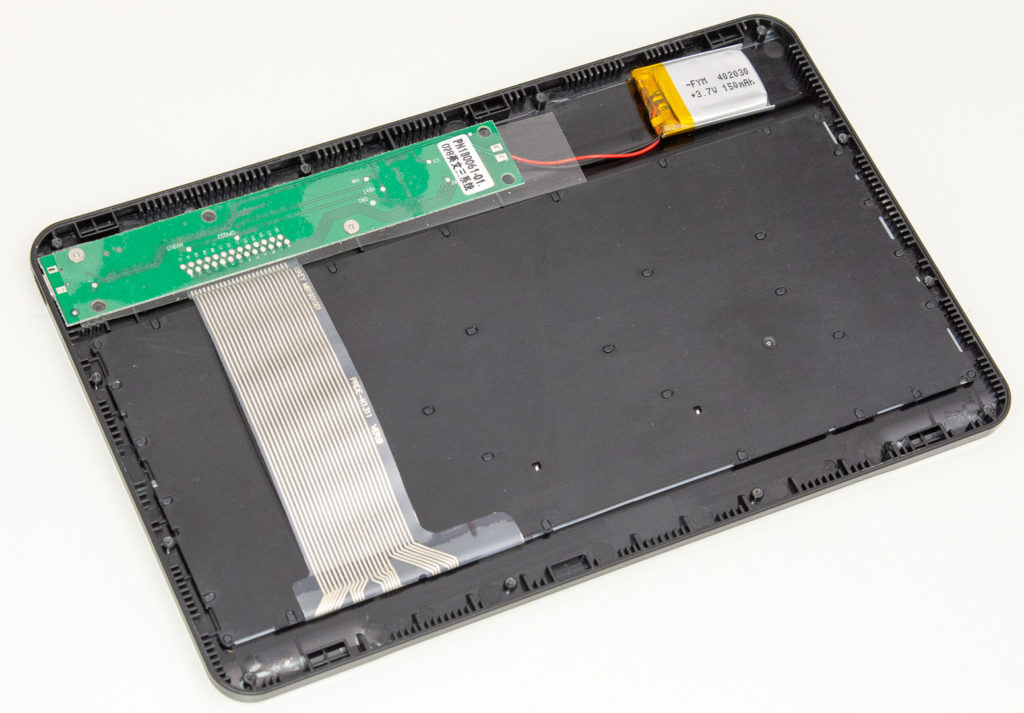 Taking the tape off and turning the board around reveals a bit spacious, but very professional looking PCB with clear markings. There are easily usable on/off switch and connect button on the PCB, a connector for the keyboard switches, and obviously some kind of microcontroller wired to the connector, as well as another smaller chip that is most likely a voltage regulator or charging chip.

I Googled around to find out if the “YC1026” MCU would have a datasheet to help me along the way, but unfortunately I only got Chinese web pages (most likely the manufacturer) without any documentation. Time to dig out my trusty Picotech 2000 scope and do some old-fashioned reverse engineering!

This project was born as a sidetrack of another one (I’m planning on building a $10 DIY Bluetooth page turning pedal for my piano and iPad sheet music app, similar to PageFlip Butterfly). I was looking if AliExpress would have bluetooth pedals, which they don’t — it seems Chinese vendors are REALLY good at copying products but there is little new product innovation combining something as simple as a bluetooth keyboard sending one or two keys with a pedal (two items that they do have)! But while searching, I found this inexpensive gadget (in case the product is removed, you might just search for “bluetooth remote” at AliExpress.com): 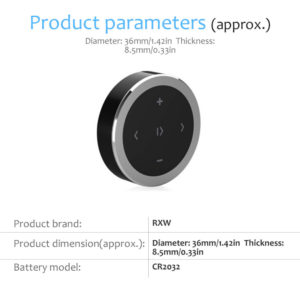 So what is it? It’s an $8 disc with multimedia buttons that pairs with your smartphone and you can use it for example in car to control your music. But maybe it would pair with my Raspberry Pi W which has integrated bluetooth as well? Well it costs about nothing to find out!

Fast forward about two weeks and it arrived. I did not try to use it for its intended purpose, but instead went straight to pair it with my Raspberry Pi Zero W. Turns out the pairing process was quite painless, you can follow for example LifeHacker’s tutorial for pairing quite easily. And it goes a little something like this (your MAC address might vary, just look for output after “scan on”):