It’s been ten months since I got and reviewed the Topre Realforce 88UB. I’ve been very satisfied with the keyboard, the only real issue being that for some reason my brain is having strange difficulties with adjusting to the new microlayout since my time with HHKB — for some reason I still hit adjacent keys quite a lot when coding, getting # instead of % or ‘k’ instead of ‘j’ (doubly frustrating with Vim!).

However, the thirst for new experiences never really leaves you, so I decided to try out the Matias switches that have caused quite a lot of discussion at Geekhack. Since I’ve liked the low thud of Topre keys and loved the compact layout of RF 88UB, I decided I’d see how the Matias Mini Quiet Pro compares to my Realforce.

After using the Matias keyboard extensively for several weeks, I think I have enough experience to write a bit about this new entrant to the rather established Cherry/Topre/Unicomp triopoly of mechanical niche keyboards. To make it more interesting, it’ll be a shootout against the reigning king, Topre Realforce 88UB. Fight is on!

Warm-up Round: Specifications and Price

I got my Realforce through The Keyboard Company in UK, and they were kind enough to provide the Matias Mini review unit for this shootout. As a thanks I’m including their banner here, and based on several years of personal experience I can really recommend them, especially if you’re within EU as there will be no customs fees.

Specification-wise the Realforce and Matias are quite similar with reduced tenkeyless layout sporting function and cursor keys. The Topre has standard pageup/pagedown etc. column whereas Matias a bit more compact but requires a function key to access insert, home and end and the more esoteric print screen, scroll lock and pause/break keys. Price-wise, the Matias sits in the not-quite-inexpensive $160 price range, but the Topre almost doubles this with its hefty $295 price tag.

As the specs are quite similar but Matias is significantly more inexpensive, the warm-up winner is: Matias Mini.

As seen from the specs, the Topre is somewhat heavier and also feels more solid with its high-quality matte plastic. Matias Mini uses glossy black plastic in its case which is sure to attract fingerprints sooner rather than later. There is a strange tube-like bulge in the back portion of the case which might be handy if you like to carry your keyboard around the house, but will not win any modern industrial design awards. 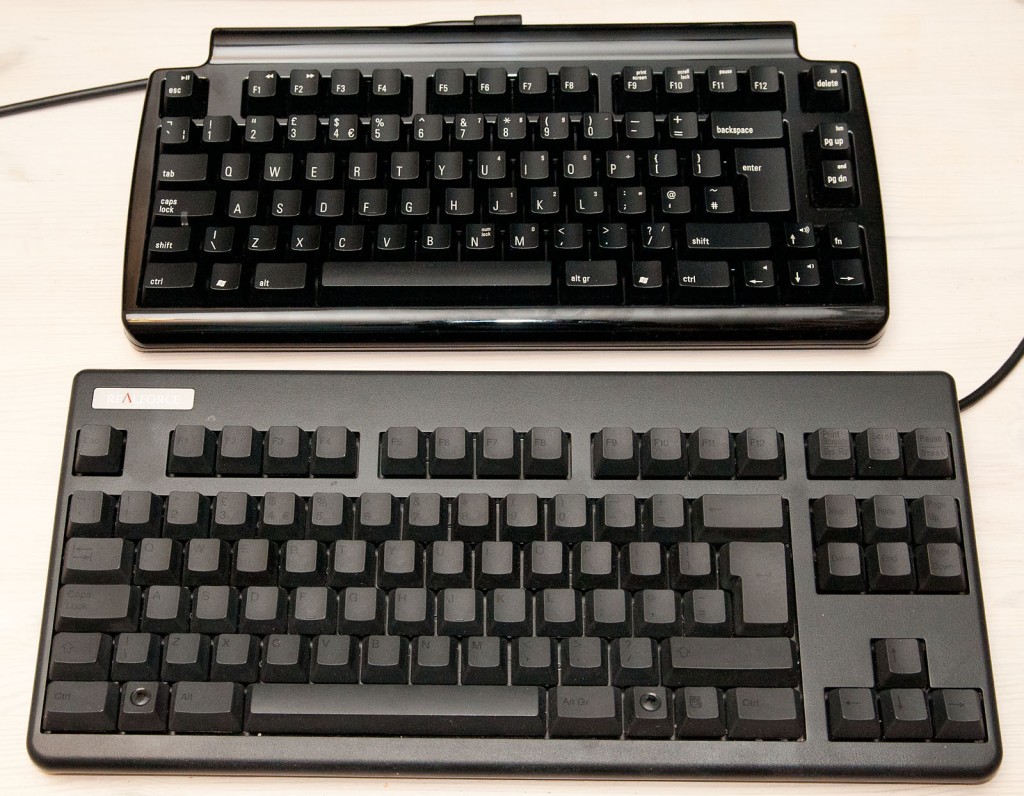 The shiny look does have its attractions, though, and in real life the Matias does not actually look too bad. The Matias keys are made of semi-matte black plastic that has both pleasant and high quality feel to it. The laser-etched key markings are very easy to read and compare favorably against Topre’s “we might as well have left the keycaps unmarked” style (which of course does look rather cool in a way).

Topre is three centimeters (a bit over an inch) wider, which gives space for full set of 9 special keys in addition to the cursor keys. Matias Mini squeezes the cursor keys nearer to the enter key, which makes the keys easier to reach in middle of typing. The downside is that delete is in a non-standard position, and Home/End keys are behind fn+PageUp/fn+PageDown.

Topre comes with an integrated cord that can be routed out of left or right side, whereas Matias Mini has a detachable USB cable (or actually, two, shorter and longer one) that goes left. Matias also has three USB 2.0 ports, one on both ends of the back “tube” and one on the very back. Side port is a good place to plug your mouse, so this is a nice bonus. I haven’t done deep testing on whether the USB 2.0 hub presents similar difficulties as Happy Hacking Keyboard 2 Professional, where some BIOSes and Grub bootloader won’t recognize the keyboard at all, but I suspect this is not the case.

Both keyboards have extendable feet in the bottom to raise the keyboard to an angle. The Matias legs are very light and stiff to operate, but I think they will work as well as the Topre ones. Personally I don’t use the feet, so no opinion on the inclination differences between these two.

Overall, I like the Topre “industrial tool” look personally a bit better, but the curved, shiny and a bit smaller Matias Mini has its attractions as well. I call this round: Draw between Realforce and Matias.

Now that the specifications and looks are out of the way, let’s dive into the really interesting part, typing with these keyboards. You can read more about my views on the Topre from my earlier review, but to summarize briefly, the Topre has an excellent tactile feel, a satisfying high-quality sound signature, and I feel the 45g weight gives enough resistance while being light enough not to tire your fingers over longer typing sessions.

Topre’s standard layout makes it easy to find the cursor keys and insert/delete (which I tend to use for O/S copy&paste because Vim captures ctrl-C and ctrl-V). However, they are not in the “home row” like with HHKB, and require really raising your hand and moving your palm when using them. 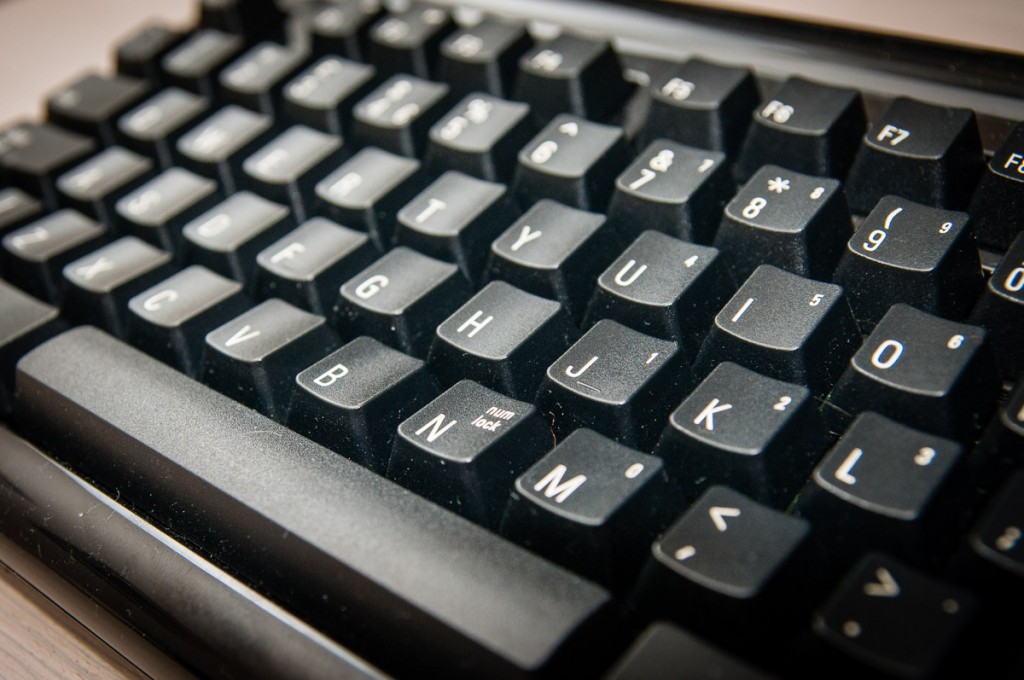 So how about Matias Mini, how do the new Matias switches feel when compared to Topre ones? Initially when switching from Topre (like I just did when typing this), the keys feel a bit heavier, as they should as they are close to 60g if I read their specifications correctly. The sound level of the quiet switches is quite comparable to Topre ones – not silent, but not loud. I’d say both strike a good compromise — they shouldn’t disturb others in your home, but you still get that “mechanical sound”.

It takes a while to get used to Matias the switches, but while there definitely is more sideways “wiggle” in the keys if you lightly push the keycaps than Topre keys which are very stable, the typing feel is very nice and after I had typed with the Matias Mini for an hour or so, I did not have any urge to switch back to Topre — actually I spent three weeks happily typing away with the Matias keyboard. It might be even that my “misplaced key syndrome” that has plagued me since selling my HHKB was less pronounced with the Matias, which is a good sign.

The sound signature of the two keyboards, while equally loud (or quiet) is very different. The sideways wiggle I mentioned is also audible and instead of Topre’s trademark “thud”, the Matias sound is a satifying click with some side noises. You can compare the two with a short sample, which starts with Topre, then switches to Matias, and then back again to Topre:

I’m not a quiet typist and I suspect I mostly bottom out the keys, so other people who don’t do that might get a less “busy” typing sound from the Matias (and maybe Topre as well). I don’t have a decibel meter so I cannot say much about the level of sound produced by these two, but I did notice that after normalizing the sound levels for the MP3, I had to turn my volume to around 25 % from it’s normal position for the recording to match actual sound levels. YMMV

On absolute scale from 1-10 with 10 being the best, I would give Topre 9 (I have to admit I’m a fan, though). But Matias Mini is surprisingly good as well, and I’d rate it 8. Apart from these two, the only other keyswitch I might consider is the Cherry MX Blue, and that is partially due to its addictive clicky sound. Most notably, I feel Matias edges slightly past other flavors of Cherry switches than the blue. Nevertheless, the winner in this shootout category is clearly: Topre Realforce.

Before going to conclusions, a word about the extras. Topre Realforce arrived with a set of WASD keys and a keycap tool, but since I am not a gamer and would rather have HJKL highlighted (VIM! VIM!), there isn’t much anything to write home about.

Matias Mini, on the other hand, comes with three additional USB ports which might prove useful to plug in a mouse, a small wireless adapter or a USB thumb drive when you need one (or maybe even a password generator ;). Personally, I have a USB 3.0 hub on my desk so I did not have use for the additional ports, but in extras side, slight edge goes to: Matias Mini.

So, if we sum up the categories of the shootout, we get a nice overview of strengths of each:

In this shootout, Matias Mini scored more category wins (price & extras) than Realforce (typing experience), but it’s hard to decide which is the actual winner. In case I’d have to pick only one keyboard, it would be Topre Realforce, but the lower price of Matias Mini combined with the unique typing feel of the Matias switches will likely resonate with many others.

For a true mechanical keyboard fan, I’d say you’ll have to have either this or a non-quiet version of the Matias in your collection, for example the KBP V60 Mini with Matias Click switches which Keyboard Company recently did a review on in their blog.

Thanks for reading the review, and happy typing!

PS. I may be doing a Youtube review of the Matias Mini in the future, in which case I’ll be updating this article. Stay tuned!

I’ve tried a lot of different keyboards (though no MX) and Realforce takes the fun out of trying new boards…it’s so good it leave little motivation to continue the hunt.