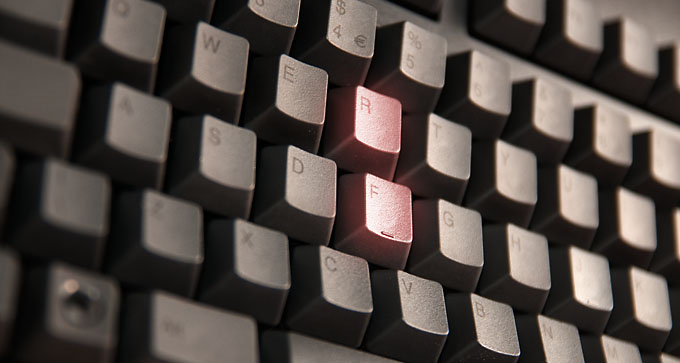 This is my review of the Topre Realforce 88UB mechanical keyboard with evenly weighted 45g switches and UK layout. This is the ISO layout sister model of the Topre Realforce 87U (87UB / 87UW) so everything in this review will apply for that model, except a few layout details regarding the extra keys. Before diving into details, a short background of my previous journey:

Two years ago I got really interested in high quality mechanical keyboards. After all, the keyboard is the instrument I use several hours every day, so if I am spending close to 2000€ on a workstation and display, why should I compromise with a cheap 30€ keyboard, especially since the keyboard will likely last several workstation lifespans?

After heavy research I settled on Happy Hacking Keyboard 2 Professional due to its compact “hacker” layout which seemed great for vim, and Topre key switches, which many consider to have the very best tactile feel. See my review of the HHKB2 keyboard for details.

However, in two years of typing with the HHKB, I never fully learned to use function key bindings for cursor keys and Home/End fluently. Coding with Vim somewhat alleviated the problem, but every time with a command prompt or a shell this nagged me. Also, playing games required a separate keyboard, as most games make use of function keys, and many make use of both WASD and cursor keys. It was time for something else. Something better.

After my experience with HHKB, I had the critical components for my dream keyboard well thought out:

The items 1 and 2 are quite easy, but the third one essentially meant that the Topre Realforce line would be the primary candidate to fill all these needs. I’ve used The Keyboard Company before and they have a superb selection of Topre models, so I quickly zoomed in on the black 88-key model with UK layout:

I spent some time agonizing over the variable vs. fixed weight options, but in the end I liked the “all keys are made equal” philosophy better. Some people at geekhack forums felt that 45g is too light, whereas others said that longer typing sessions with 55g tend to cause fatigue. I’ve liked the weight of my 45g HHKB so I settled for that one. 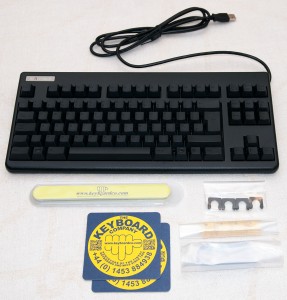 The keyboard arrived in few days via Royal Mail post in a sturdy cardboard package. Inside the outer package was another fairly unremarkable box of brown cardboard, which I think is the standard packaging for Realforce keyboards. Those Japanese are surely all about the product and not presentation!

However, the nice folks at The Keyboard Company had included some extra items inside: A set of coloured WASD keycaps, a keycap removal tool, two Keyboard co coasters (always useful, eh?) and what I assume must be two yellow nail files (!). The files might become handy if you have sharp fingernails and want to save your precious new typing instrument — it is close to 250€ with taxes after all! :) The keyboard has a 1.6m (5′) cord and weights a hefty 1.2 kilograms (2 lbs and yes, I weighted it), so you definitely will not lug it around for fun.

The underside has two rubber squares in front of the keyboard to keep it from sliding on your desk, and two retractable plastic feet if you like to adjust the typing angle. Personally I like my keyboard level for ergonomics, and the Realforce is high enough to warrant a wrist rest for optimum typing comfort. I used the same high quality wooden Filco I bought for my HHKB and it worked very well.

It’s a USB keyboard without number keys. Plugging the USB cable in, I also briefly checked if my old Logitech PS/2-USB adapter would make the Topre to work in a PS/2 mode. It didn’t, so obviously the keyboard firmware doesn’t have a legacy PS/2 compatibility mode. Thankfully, it doesn’t have the crazy USB hub feature of the HHKB, so Topre can be used to select boot options in machine startup, and enter BIOS.

The layout is bog standard ISO with UK markings. The black-on-black is not easy to read in dim room lighting, which is a plus in my book, as I switch between US and FI layouts and try to not have to look where each key is. It is not the “unmarked” Das Keyboard style model, but I’m not that much into those anyway.

Windows keys are present, and the control, alt and shift keys are in their standard positions. Caps lock and scroll lock do not have LEDs, but I highly recommend everyone to remap caps lock to control (or if you for some strange reason love using it, swap it with left ctrl) so that is of no consequence.

Dedicated cursor keys and the six special keys above them, plus function keys mean that the keyboard works very well in gaming, too. And I can rest my hand on the edge and use Page Up/Down to browser longer texts without having to have my other hand’s pinky on a function key. Excellent.

And now comes the most important part: How does it feel when typing? One word: SUPERB. I may be biased after using the HHKB for nearly two years, but I judge the Realforce with 45g nonvariable weighted keys to have the best typing feel of all the keyboards I have ever tried. The list does include most Cherry MX variants, but I haven’t tried the new Mathias switches. Topre switches strike a perfect balance between lightness and physical feedback, and they work very well for me as I bottom out lightly the keys when typing.

So how to describe the feel? Well, with the 45g Topre switches I’d say there is initial resistance against keypress, which smoothly “gives out” and the button drops down. There is a definite tactile bump at the moment of actuation, but not the associated click you get from Cherry MX blues for example. I recall Cherry MX browns are the most similar in this respect, but they have a rough micro-feel whereas Topre is softer/smoother.

Also, the sound is extremely pleasant and almost addictive, with a smooth “clack” type of sound. I think the keycaps are PBT which makes the markings on the very durable, and the surface texture is more pleasant than basic ABS plastic. 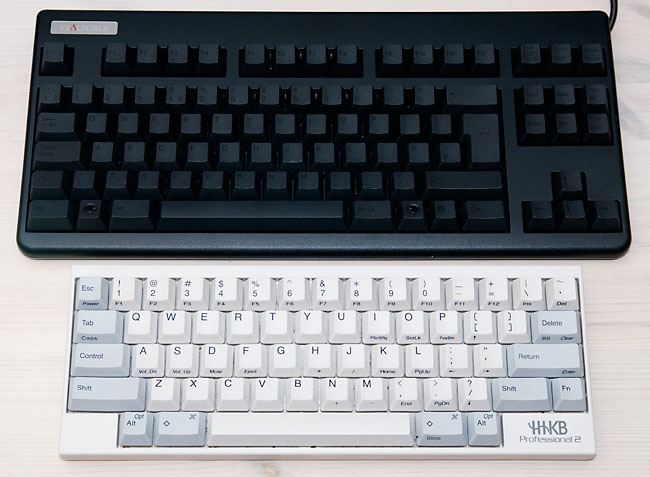 Having used the Happy Hacking Keyboard 2 Professional for almost two years, I’ve gotten to know it’s strenghts and weaknesses quite well. After several weeks of typing on the Realforce, the experience is very much the same but with some differences. Here is a tabulated summary of my findings:

The table draws quite a good picture of the differences between the two keyboards: Both share the superb typing feel (plate vs. board mounted is more of a preference), but whereas the HHKB2 requires a “learn and adapt” mentality with several quirks and small drawbacks (especially as the sole input device), the Realforce is just a very high quality keyboard without much special character into it. 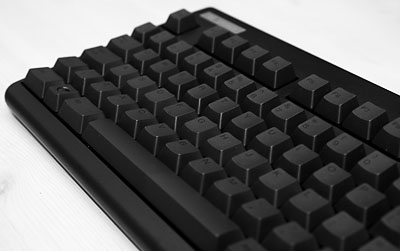 After about three weeks of daily use, I’ve sold off my Coolermaster Quickfire TK with Cherry MX Blue switches and the Happy Hacking Keyboard 2 Professional, as the Realforce has equivalent (or maybe better, due to plate mounted switches) feel of the HHKB, but superior layout than either of my earlier keyboards. I am fairly certain, that if I get additional keyboards, they will be more for novelty value or special use (such as my Logitech K810 bluetooth KB for travel).

Retailing at almost 250€, it is certainly among the most expensive-yet-normal keyboards out there, but in my opinion it is perhaps the ultimate keyboard for daily use. Compared to the HHKB, I’d call the Topre Realforce 88UB the Happier Hacking Keyboard. There is really not much that can be improved in this one. Except maybe better availability of custom keycaps so I could get some retro colors on this baby!

I have a HHKB and love it. I do miss the function keys and arrows. What did you pay for your RF?

The Realforces are quite expensive, currently at £192 including VAT (around 270€ / $300) from The Keyboard Company where I got mine. For full disclosure, I promised to link to TKC in the review (they are one of the few selling it in any case) so I did get a reduced price. :)

Elitekeyboards.com have a nominal price of $199 for the US layout version, however they are out of stock. Don’t know if it’s available somewhere else as well.

You can get them from Amazon.jp and amazon can ship to you if you add an international address. If they won’t ship it, you can get it through a Japanese proxy. Both methods are cheaper than buying it from elitekeyboards.