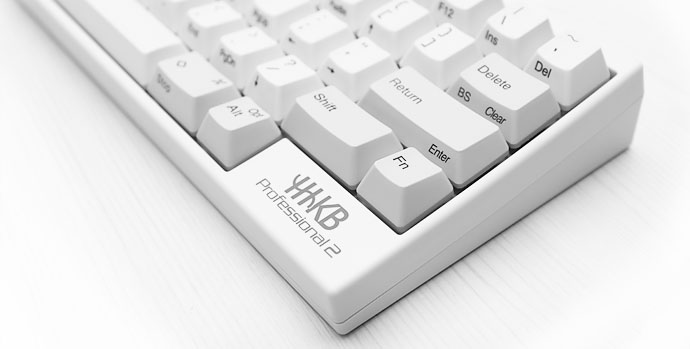 The keyboard is something that I use daily, and whether I’m writing e-mails or coding, I’ll likely do several hours of typing a day. Last summer when I switched to US layout in coding and started using Vim, I started thinking that maybe I should upgrade my seven year old Logitech keyboard to something hopefully better. And when I get such a project, I did what I always do: Went totally overkill with research and ended up spending a few hundred euros once I had made up my mind on the “most optimal choice” for me. :)

Update: If you’re interested in this review, you might want to check out my continuation with the Topre Realforce 88UB.

My worldview after 2000 was essentially that laptop type flat keyboards are the way of the future, and keyboard choice mainly depends on whether you buy a Logitech or Microsoft one, and do you get the top of the line model or an OEM version for 15 euros. Enter Geekhack and some interesting discussions at Stack exchange, and it quickly became apparent that there is more to it.

First choice one needs to make is the layout of the keyboard. Kinesis makes some weird looking ones that some people swear by, and there are matrix-type layouts, I decided I would continue to risk carpal tunnel syndrome with a “normal” layout for the time being, as I don’t want to optimize my brain for a keyboard type that would only be available at home.

Second choice is about the mechanism. Cheap keyboards are based on rubber domes. Many laptop keyboards and the Logitech I was using previously use a scissor mechanism which is a bit nicer. True hardcore keyboard enthusiasts like mechanical switches. Cherry makes many of those and they have different “colors” that have different tactile curve and sound – there are Cherry MX browns, blues, reds, blacks, and many more. Some swear IBM Model M keyboards with buckling spring switches are the best – Unicomp still manufactures those, but they are very noisy, and I didn’t want my late night coding sessions to be that loud.

And then there is Topre, which uses a patented electrostatic mechanism that many seemed to like very much. Topre keyboards are made in Japan, they are very expensive in US (for some reason here in Finland Verkkokauppa.com sells them at a reasonable price of 150 euros). I was considering Topre’s “tenkeyless” (i.e. a version without numpad) when I came across the Happy Hacking Keyboard. 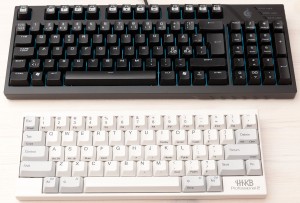 The Happy Hacking Keyboard Professional 2, or HHKB Pro2 in short, is a minimal keyboard that, in addition to numpad, drops also cursor and navigation keys, as well as the function keys. On the left you can see how small it is even compared to a “tenkeyless” form factor keyboard (the CM Quickfire TK actually has the tenkeys, which double as cursor keys). The basic philosophy is that you’ll have all those keys in the minimal layout with additional function key, and your wrists will never again need to reach to cursor keys on the right side of main typing area. It also is a very good way to learn Vim’s use of hjkl as movement keys. :)

The layout is similar to US keyboards, but escape key has taken the place on left of ‘1’ (easy to reach for Vim use, again), and the tilde key is moved above backspace. Control key is in place of caps lock, a superb improvement which I’ve now replicated with a simple registry tweak to my work laptop, too. The switches are top-quality Topre ones, and weighted equally (some Topre keyboards have variable weighting based on strength of individual fingers pressing them, I want to try those some day).

In addition, the keyboard has internal USB hub with 2 additional ports on the back. The current capacity of those ports is somewhat limited, so power-hungry peripherals may not work. The price is somewhat steep (with customs I paid a bit over 300 euros for mine), but considering that the keyboard will likely give a decade of use, I’d say it’s a significantly better investment than a graphics card or SSD drive.

After using the keyboard for several months, I’ve come to like it very much. It has several significant positive attributes that I now miss every time I need to use the black Coolermaster one shown above: 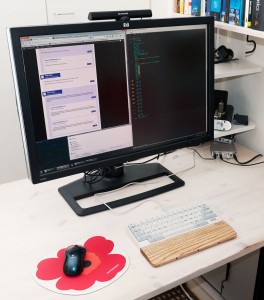 Main problem for me with the HHKB comes from the fact that it’s an US layout keyboard. This means several things:

Due to above issues, I now need to juggle between two type of layouts in my brain. Normal typing is fine, but those few special characters really take some hunting from time to time. This issue is actually not limited to HHKB, but also related to the fact that I now use US layout for coding, and many special characters are in slightly different places on US and Finnish layout. Most annoying ones are the asterisk and parentheses, which are needed surprisingly often when typing, but also @, &, ^, $, /, ‘, “, ;, and : are in different places.

In addition to the Big Issue, there are some minor quibbles I have: 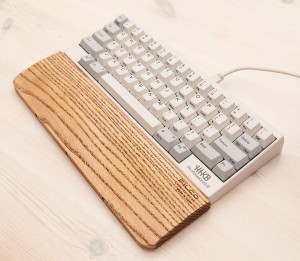 Based on three months of use, I can definitely recommend HHKB for anyone who can afford one. It feels great to type on, looks beautiful, takes almost no space and has some nice tweaks in key placement that make it an excellent keyboard for any hardcore coder or Unix guru.

However, you either need to be comfortable using US keyboard layout, or are prepared to work around the missing international key, and differently placed enter, backspace and ‘ keys. This hasn’t caused me too much grief, but for some it might be an issue. Also, it’s not a gamer’s keyboard due to limited N-key rollover.

Update: If you found this review interesting, be sure to check out my continuation with the Topre Realforce 88UB.

You say that the HHK2 has only 2-key rollover. Do you have some reliable source for this? I have done some googling, but only found a couple of websites mentioning that it should have a 6-key rollover (as all keyboards connected via USB). Thanks.

Hmm, I saw it in specs on some website X, but now that I google it again, I can’t find where I got the 2-key rolloever from. Default USB spec gives 6-key rollover so HHKB might actually be able to do this. So no NKRO, but possibly more than two. I’m travelling so if I remember, I’ll post my experiences here when I get home.

From personal experience, I type pretty fast (500 chars/min) and have never had a problem with rollover with HHKB. Even games usually don’t need more than a few keys and modifiers, so 99 % of gamers are probably OK, too.

Six keys plus modifiers seem to work great. I’ll update the respective part in the review. So only issue for gaming is the missing function, cursor and numpad keys.

Thanks Joonas! I think a 2-key rollover might be a problem, but 6 is definitely OK.

I’m in UK, didn’t question ISO layout until I tried ANSI. I changed all my keyboards to ANSI, including my MacBook. Much more logical and efficient layout providing you type in English.

I giggled about the gaming content. This is a _hacking_ keyboard, not a gaming keyboard (and I’m typing on an HHKB Pro 2 right now).

The Japanese co-hacker who finally convinced me to get this (al though I had known of and seen HHKB’s for years) takes his wherever he goes. This prompted me to get a carrying case. No need to fret about “other” keyboards when you HHKB is with you. As my Asian co-worker points out, I’m used to carrying around my “axe” (I play sax), so why not my keyboard? Isn’t your keyboard just as personal and important?