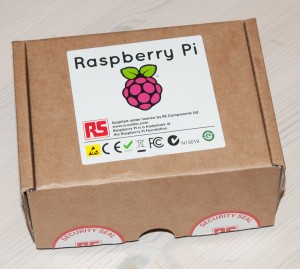 A rather long wait ended today, when DHL dropped this little package off at work in the morning. I had placed my Raspberry Pi order in the first 24 hours when they started taking orders (or actually, registrations of interest) from RS Components, but it took about two months for me to receive the invitation to order, and three more weeks for the order to arrive.

Opening up the box, I was greeted with a very small computer, and two small leaflets, a quick start guide and a regulatory and safety pamphlet. The board is really quite small, just a few millimeters larger than a credit card. Two USB slots, HDMI, coaxial and stereo audio plugs and micro-USB for power, plus an ethernet jack. 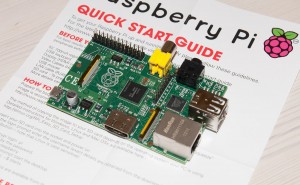 I ran a quick test to see if everything worked. Initially, there was flicker on my projector (the only device with native HDMI input I currently have), but that turned out to be incompatibility with the HDMI switch I had – without it it worked just fine. I used the premade Debian image on a SD card and it worked perfectly.

I haven’t quite yet decided on the first hacking project I would like to do with this, so I’m open to suggestions. Some initial ideas from the top of my head include:

An additional idea that I had, and anyone’s free to pick up this one, would be to write a piece of software that uses the SPI pins to program AVR microcontrollers directly. The Pi is basically the same price as many dedicated ISP programmers, and I’d much rather have a full-blown ARM Linux computer with the same price!

Awsome. Hope you will post cool Raspi hacks and tutorial ASAP. BTW did you have to pay any additional tax or duties for shipping than the total cost of 35$?

Perhaps some code from BusPirate could be ported on Raspberry Pi, transforming it into an universal programming and debugging tool.

Cool idea! I really might take a look into that. Having my summer holidays in a few days, so plenty of time to tinker then. :)

No additional tax or duties, only shipping charges, as I think RS delivers from inside EU.

Did you ever finished the “HDMI Sheild for Arduino”? I have been looking (unsuccessfully) for a good/cheap solucion to display simple text/graphics on a colour monitor derivem by Arduino and your project seems very promising

It’s still work in progress. I might do it in a week or two, maybe even earlier. :)