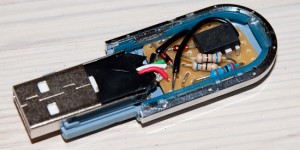 Having done half a dozen V-USB tutorials I decided it’s time to whip up something cool. As USB keyboards were an area untouched, I decided to make a small USB HID keyboard device that types a password stored in EEPROM every time it’s attached. A new password can be generated just by tabbing CAPS LOCK a few times (4 times to start password regeneration and one tab for each password character generated, 10 is the default password length). Below you can see the device in action:

The place I work at requires me to change my password every few months so this would be one way to skip remembering a new password altogether (as long as I remember to write it down before regenerating a new one so password can be changed :).

The device is powered with a simplified version of the hardware I used in my ATtiny85 USB tutorial – I stripped away the LCD, reset pullup and both capacitors. If you’re better in cramming components inside enclosures I suggest adding at least a 0.1 uF capacitor between VCC and GND, but it seems to work fine even without it:

If you’ve done even a bit of electronics, the chances are that you’ve already amassed a hefty collection of resistors. Buying them is fun but finding the right values from a stack of resistors is not. I noticed that you can buy actual “resistor folders” with nice labels and the full E24 series of 1500 resistors for $100. I already had resistors so I decided to make my own folder with less expense.

I walked into the nearest book store and quickly found a promising offering: 10 transparent plastic sheets of “collectible card holders” for about 3€. Any store having binders and associated supplies will probably have something similar. I also bought a thin A4 binder and 200+ label stickers for about 9.90€ total (about 1:1 to dollar prices). Here’s what I came home with (already added the stickers): 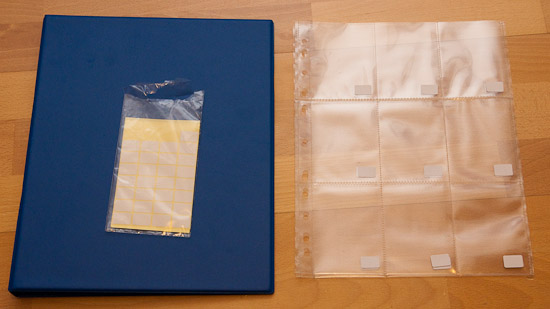 Each sheet had 9 pockets so for 3€ I get storage for 90 values, and 10-20 resistors fit into a pocket without making the page too heavy. I labeled the first 72 based on my E12 series and that left me with 2 extra pages for “exotic” resistor values. Here’s the first page of E12:

I promised to commenter Marek to post an example of using usbFunctionRead() to return larger amounts of data. So building upon the ATtiny85 version we made in last part, let’s add one more command to usbtest.exe:

The reason a started my electronics hobby was that I wanted to build a chess clock. Lacking a proper LCD display, I chose to multiplex several 7-segment displays. Most sources in the net did not specify hardware at all, and those that did were driving the segments with a 74HC595 shift register and using NPN transistors to enable one common cathode display at a time. However, if you look at 74HC595 specs you’ll notice that it’s not designed to source the amount of current that is required to drive several multiplexed 7-segment displays. It might work, but no one can say for how long!

It took me a while to find a good, inexpensive and readily available alternative. I finally found it in ULN2003, which is inexpensive darlington array that can drive 500 mA from each of its pins. So I decided to write a little tutorial on 7 segment multiplexing that walks through all the needed hardware and software in detail. Here’s what we’ll build (click for a larger image): 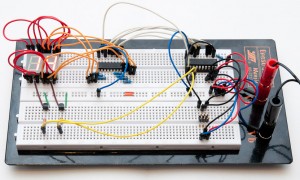 For this tutorial I assume you know how to connect ATtiny2313 to a programmer and flash it with custom software. You’ll learn as much in IMakeProjects.com’s AVR tutorial. You’ll also need the following components:

Default feed not disabled with Suffusion

I switched to a new WordPress theme, Suffusion! Hooray! However, the %#&/?! default feed link is added to HTML even if disable it in Suffusion settings. Not hooray.

Digging into Suffusion code, I found suffusion_include_default_feed() from functions/actions.php, but it seems that it correctly does not output anything when I disable the default feed. Furthermore, the alternate feed URL actually does output my FeedBurner feed URL. So it seems Suffusion is not generating these links by itself.

Grepping around the WordPress source code (a look through the dozens of templating PHP files really makes me want to code a barebones blog myself) I finally located the culprit: feed_links() method in wp-includes/general-template.php. Why is this called? Where should it not be called?

It seems at least wp-includes/default-filters.php is adding this feed_links action to wp_head. I commented it out, and what do you know, the nerve-wrecking automatic feed URLs are gone!

Just thought to share it if someone else is having the same problem. It looks like Suffusion should have the following somewhere if default feeds are disabled:

It seems Suffusion is adding a ton of actions and filters in its functions.php, namely in function suffusion_setup_custom_actions_and_filters(). So here’s a patch which gets rid of that default feed URL if you have chosen to disable it in Suffusion setup:

V-USB with ATtiny45 / ATtiny85 without a crystal

One guy at Hack a Day remarked on the long wire runs in my V-USB tutorial breadboard setup. So I thought I’d build upon the part 4 of the tutorial but modify the setup a bit to run the AVR at 5 volts and use zener diodes to drop D+/D- voltage, thus eliminating the need for a regulator. And why not stop there. ATtiny45 and ATtiny85 are smaller than ATtiny2313 and have an internal oscillator that can be calibrated to provide 16.5 MHz clock, accurate enough for V-USB to do its magic. I challenge anyone to drastically shorten these wire runs! 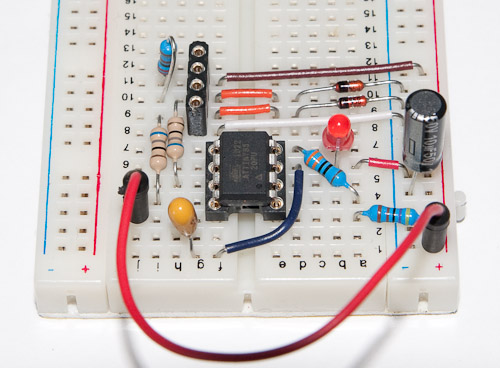 In the photo, I used a 4-pin header to show the place of the USB cable so the zener diodes would not get obstructed. Note that due to the angle it can seem like the 0.1 uF tantalum cap (light brown one) is wired to PB4 when it really is going to GND pin! Here’s the schematic, heavily borrowed from V-USB’s EasyLogger reference implementation: