Solid Angles of Planets and Which Planet to Use to Build a Dyson Sphere?

Time for something completely different from my usual electronics projects. This morning I started to wonder (don’t ask why) a couple of fundamental questions:

The thought experiment initiated from some Science podcast, probably from Anatomy of Next scientist interviews (or BBC’s Tomorrow’s World), which talked about turning Mercury into solar panels or mirrors — essentially a Dyson Swarm.

Mercury is close to sun, so it’s a clear candidate, but I started thinking “If you were an alien (or future human race) with super advanced technology arriving to solar system, which planet would you pick?”. You could of course harvest gas giants for Helium-3 and use fusion energy to do stuff, or have some not-yet-invented energy source. But let’s focus on the giant fusion reactor in the center of our solar system, and look at some numbers.

If we think of sun as a perfect sphere putting out energy in form of solar radiation to pretty much uniformly to all directions, the amount of radiation reaching a certain planet is a simple function of the planet’s radius and it’s distance from sun (π*r^2 / d). Surely you can quickly google which planet gets the most radiation? Turns out most articles on the internet for laymen focus on energy per unit of area (square feet or meters), and leave out the size of the planet completely. Well, easy to fix! Let’s start with some basic data from NASA’s planetary factsheet:

How Big Do Planets Look From The Sun?

Now as all planets are really far away from the sun compared to their radius and diameter, I’m just doing a shortcut and calculating their angle from sun as just the ratio of diameter and distance, owing to the fact that sin(x) ≈ x for very small values of x (second coefficient of Taylor series expansion is x^3/9 so with these numbers we’ll get about 20 significant digits correct). Calculating diameter/distance shows that even the largest planet from the sun, Jupiter, is just 184 microradians, that is 0.000184 radians wide when viewed from the sun! Full sky would be 3.14 radians, so there’s some way to go!

I have also calculated the solid angle as steradians. See the Wikipedia links for details, but basically it tells how large portion of unit sphere an object covers from the viewpoint of the observer (in this case, the sun). Here I’ve again assumed the cross section of a planet equals its spherical cap — the math is very similar to the angle. To give an illustration what one steradian looks like, see the image below. 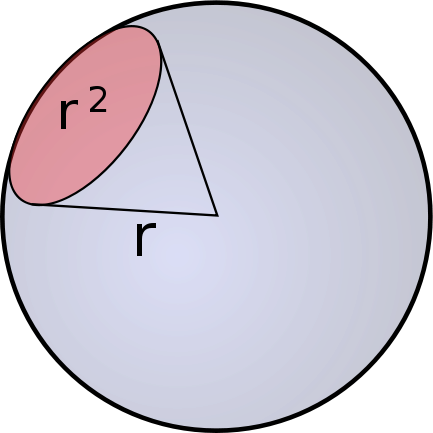 One steradian of a sphere the radius of r is a part of surface area the size of r^2 (courtesy of Wikimedia Commons, see attribution and license)

Full surface of a unit sphere is 4π, so I also included above how large portion of Sun’s radiation is covered by the planet. Jupiter gets the most with a total of 2 billionths of the Sun’s energy output hitting its surface. Considering the distances, this is actually surprisingly large amount! Please throw me a comment if I got my maths wrong…

Based on the above diagram, Jupiter gets the most of Sun’s energy, followed by Venus. Considering the extreme gravitation of the gas giants, it might be easier to land a self-replicating probe on Venus and start converting it into solar panels. Of the smaller planets, Mercury and Earth are about equally suitable. But if you factor into equation the amount of work turning a planet into solar power generation, the fact that Venus is fifteen times bigger in terms of mass than Mercury, it’s easy to see why Mercury is a prime candidate. If we assume an exponential process of self-replicating machines mining a planet into solar panels, and say for example it takes 10 years to double the mass of these robots, it would take 80 years more to convert whole Venus to solar energy production than Mercury, for just 76 % more energy output.

The discussion above assumes, that one could cover a planet with solar panels (and discard the effects of atmosphere and magnetosphere, which would bounce off radiation before it hits the ground), but the shape would remain spherical. But what if we also reshape the planet? This would have dramatic consequence to the available energy. Again, let’s simplify the thought experiment by discarding material analysis, and assume we can make a square meter of solar panel using one kilogram of planet mass. It will give us a usable yardstick, as if we’d actually need 300 kilograms of Venus for a solar panel, we can just divide by 300.

Now if we could magically, or ahem, scientifically turn a planet into a Dyson sphere around the sun with the same radius as original orbit distance of the source planet, it turns out we’d have ample material for a Dyson sphere. See the calculations below:

Jupiter would actually have enough mass to provide 250 kilograms of stuff per square meter. Venus comes second with a factor of 33. Mars would require us to attain quite the assumed 1 kilogram per square meter if we were to fully encircle the sun at that distance. Of course we have no idea if an incredibly advanced civilization would be able to make light-absorbing superintelligent film just a few atoms thick — in that case they could even use just the Moon and be done with it.

Well, that was an entertaining thought experiment. Based on some quick maths (I’m really hoping I got my decimals correct here), we can draw some quite interesting observations and conclusions:

While the above findings are interesting, you really cannot draw any conclusions of feasibility of the projects without considering more complex issues such as surface temperature, pressure, gravitation and the composition of different planets. But it’s interesting to know the scales at least!