Look what the mailman brought: It’s a shiny (or maybe matte?) BeagleBone Black, freshly arrived (actually it’s been over a month, but time sure flies…) from Newark element14! I’ve been doing Raspberry Pi related hacking for a while, but especially when the Pi was still fresh and new, I did from time to time consider if the grass would be greener on other side of the fence. Or blacker, in this case, as I mean BeagleBone Black.

BeagleBone was long very much more powerful than Raspberry Pi, but now that Pi2 has come out, price and specification-wise they are closer than ever. A quick personal comparison chart:

When Pi1 was out, the BeagleBone Black with the more modern Cortex-A8 chip and higher clockrate was definitely the more powerful, but now with 4-core Pi2, the tables have somewhat turned. Still, the clockrate is higher and there’s more GPIO. And speaking of GPIO, my Raspberry Pi vs. Pi2 GPIO benchmark has gotten a lot of interest, so I thought the best way to take this black beauty for a test drive would be to benchmark BeagleBone Black GPIO in a similar way. 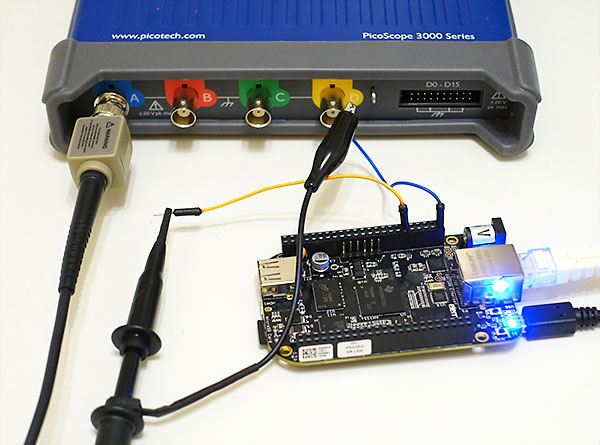 The test subject is the most recent revision C of BeagleBone Black. I followed the (a bit lacking in detail and readability) Getting Started guide and downloaded the latest Debian Jessie image (8.3, 2016-01-24), flashed it to card and ran apt-get update and apt-get dist-upgrade (2016-04-14).

While flashing, I realized my main partition on the microSD was still only 4 GB, but thankfully the upgrade had just enough space to finish. I suggest expanding your partition before upgrade. Unlike Raspberry Pi, the BeagleBone does not ask upon first boot to resize the partition (or due to headless setup I missed this).

Below you can see a summary of the GPIO benchmark results. Read on below to see the actual code used and measured waveforms when applicable. If you have a platform you’d like me to cover, you can make requests at the comments section, I’ll try my best to accomodate!

The test is a basic “toggle one GPIO pin as fast as possible”. It does not measure multiple pin performance, input performance or the capabilities of built-in hardware capabilities like I2C communications or PWM which might operate on significantly higher speeds. It basically tells that with benchmark speed of 1 kHz, you can expect 2000 toggles per second on that programming language, or on average 0.5 ms for a single toggle.

The test doesn’t measure variance either, similarly to the Raspberry Pi benchmark, the underlying Linux operating system can (and will) interrupt the benchmark program to do other things, and the GPIO will “hang” during this time. Linux is not a real-time operating system, so any applications that require exact timings will need to be handed over to a microcontroller board like Arduino, or alternatively use the hardware I2C, UART, etc. capabilities of the BeagleBone Black.

Unline Raspberry Pi, BeagleBone Black has no single wiki page where you can find different programming language examples of GPIO use. Thankfully, Adafruit has great tutorials for the BeagleBone, so we’ll start with adapting the Python LED blink example. Code is quite straightforward:

Measuring the frequency with Picoscope, we get a decent 5.5 kHz square wave. However, on grander scale of things, we can see there are quite long gaps of about 10 milliseconds between some of the transitions: 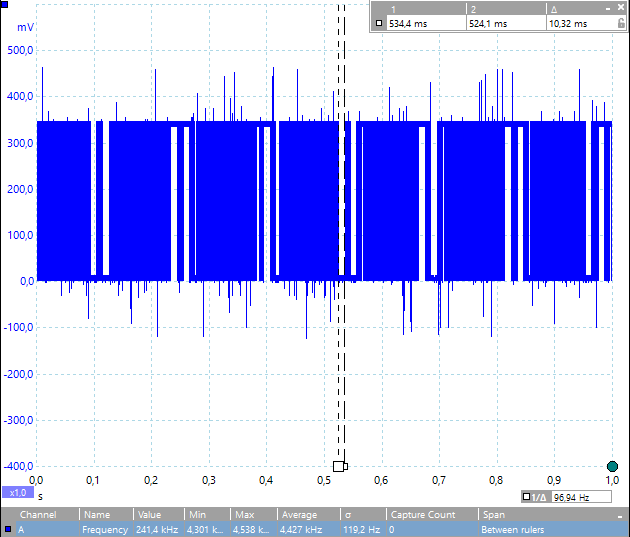 This is probably due to single core ARM CPU that needs to handle network traffic and other kernel housekeeping tasks every now and then.

Did I already say GPIO programming seems more of a chore on BeagleBone than on RaspPi? Well, I stumbled to multiple mentions of “capes”, “cape manager” and such, and as a result of some kernel changes, and me using kernel 4.1 that came with Debian Jessie, it took a while to realize the “bonemanager” directory had moved to a new place. After this, I was able to use Derek Molloy’s very helpful, but still quite complex 45 minute video tutorial and related shell commands to install his demo overlay that claims P9 expansion slot pin 12 (that is the 6th inner pin from 5V power connector downwards), i.e. “GPIO 60” alias “pin 30” a.k.a. “GPIO1_28” that is the pin on address 0x878, meaning offset 0x78 as it’s own so it can be used safely as an output. Beat that Arduino — you only have 3 numbering schemes for a pin! I still have no idea if the code below would’ve worked just fine without following the tutorial or not… Here are the main commands needed for compiling and loading the overlay:

After that, I was confident enough to fiddle with the port 60 to my heart’s content, which enabled me to almost copy-paste the shell code from RaspPi benchmark — this is also very similar to this tutorial:

The results are not too great, roughly 3.5 kHz square wave with similar 10 ms gaps every now and then: 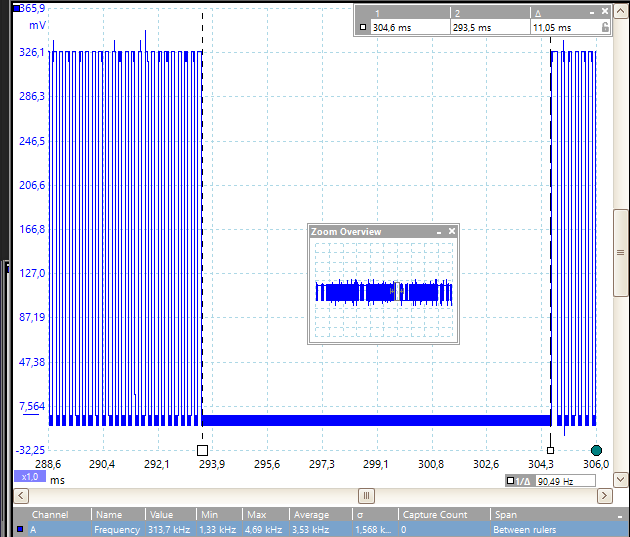 Once the weird cape overlay thingy was installed, I was able to modify Derek’s LED blinking code to make a faster-than-shell version of the above method:

The result is faster than the shell, but only a bit: 5.3 kHz on average. The screenshot below has a zoomed in view to waveform which shows slightly better result (6 kHz): 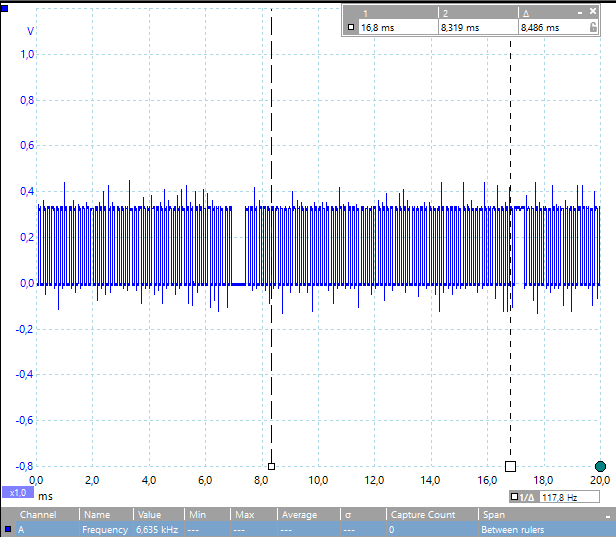 Obviously you can only go so far through the filesystem. Unfortunately, more direct access also means more code. Thankfully, Chirag Nagpal had already solved this recently and made his code available on github. Chirag had found out, that in order for the memory-mapping to work, you need an overlay to reserve the GPIO pin to be used. Luckily (or not completely as he already read Derek’s tutorial) he’d decided to use the P9_12 pin I had already figured out to overlay properly, so things went quite smoothly:

After running, I was greeted by blisteringly fast toggling signal — 2.9 MHz on average, which is about thousand-fold increase, just like Chirag had experienced: 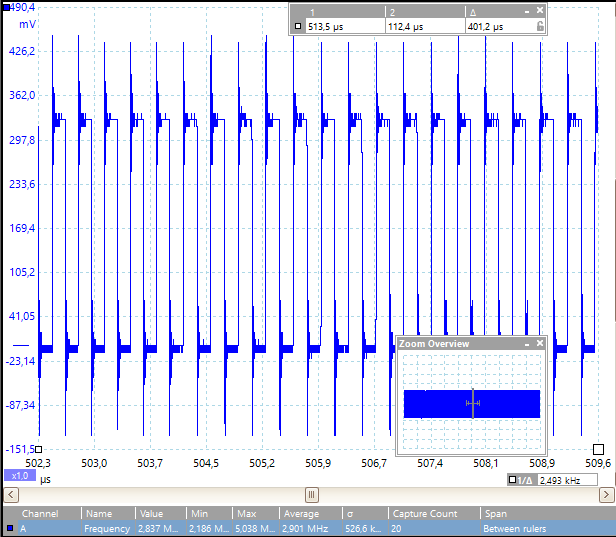 Based on the GPIO tests I’ve carried out today and what I’ve learned along the way, I think one can draw four conclusions regarding BeagleBone Black GPIO access and performance:

Thanks for reading! I’ve now covered Raspberry 1, Raspberry 2 and BeagleBone Black in these GPIO benchmarks. Perhaps it would be time to get a Raspberry Pi 3 to test drive next? :D

The omission of PRU usage seems to make no sense here.

What is your motivation behind this?

Good note. I’d say ignorance was the motivation of omission, the BeagleBone site and Wiki pages did not readily offer much information about GPIO, let alone PRU. If you have a code snipped that could do GPIO toggling on the PRU, I’d be happy to include it to benchmark.

All in all, it was surprisingly hard compared to RaspPi to find GPIO code examples for the BeagleBone, maybe the community is more closely knit and for that reason there was no wealth of resources “for dummies” like there is for the Pi.

i’m curious what the results are if you run you bbb at 1ghz? according to the test setup picture you’re powering the bbb from usb and that caps the cpu speed at 300mhz. to get 1ghz power it from the 5v barrel jack or gpio pins.

Those blue LEDs hurt my eyes even in the picture. Why must people use blue LEDs?

I really was enjoying your GPIO benchmarks and I was wondering if you still do them. If so could you do a benchmark test with the new Tinker Board compared with a Raspberry Pi? The community is not really big at the moment, but the Tinker Board has much potential. Would really be interesting to see how it works out. It beats the Raspberry Pi 3 in every case in synthetic benchmarks.