I’ve had a small problem over a year: I have two headphone amplifiers, a transistor-based O2 headphone amp, and a tube-based Little Dot MKII. I also have two sets of headsets. Because switching the cables all the time is somewhat tedious, I haven’t really used the other amp and headphone set.

There are several Y switches that you can buy, but most seemed either expensive or mostly tailored towards electric guitar enthusiasts. And I would still need to combine two Y switches to toggle between the two amps and headphones. As the construction is really simple, I decided to solder my own. Here’s a short tutorial on how to make one yourself. You’ll need:

The design of the switch is extremely simple. In both ends, three wires come from each of the two connectors to a switch, and the switches are connected to each other. I chose not to combine any ground lines to avoid ground loops. You need also to select a switch which breaks the connection on one side before connecting the other so the amplifiers will not feed into each other.

Despite the simple construction, there is a lot of soldering involved. Each of the four connectors will have ground plus left and right channels, and all have the switch on the other end. That makes 24 solder points (4x3x2), and there’s six more between the switches for a total of 30 points. The 3.5mm connectors had small “L” and “R” markings to tell which channel is left and which is right. I used different colors of wires for each type to avoid mixing L, R and ground. 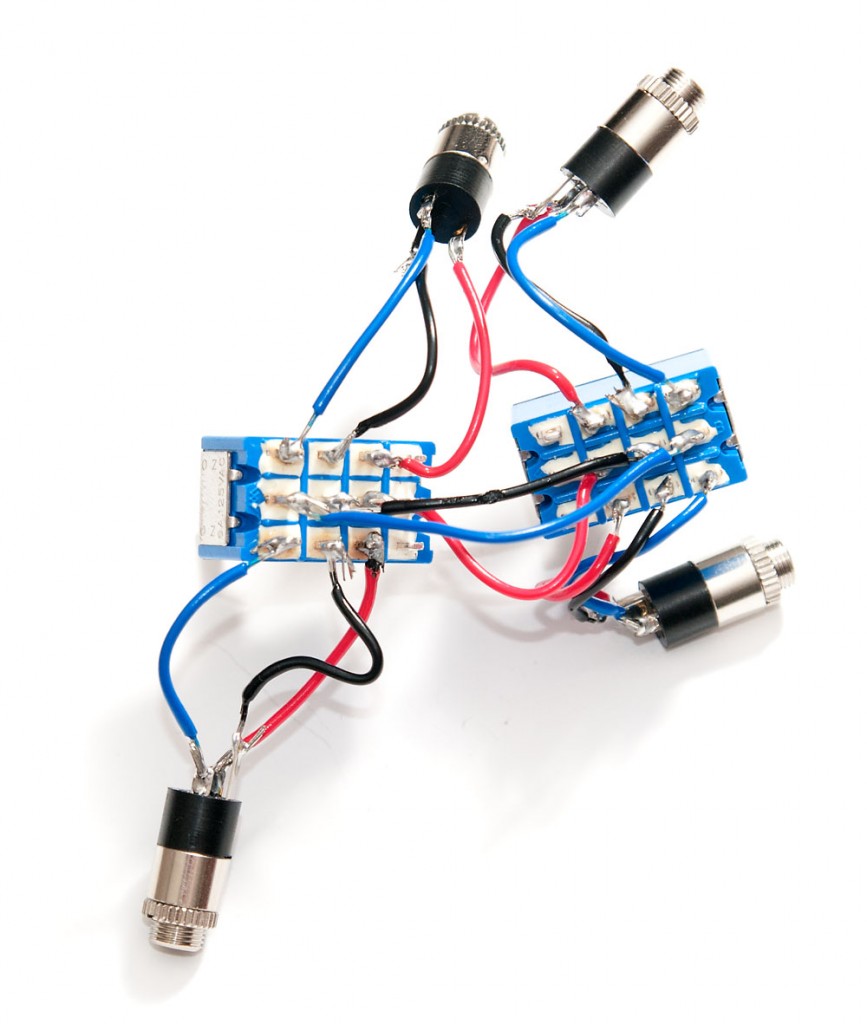 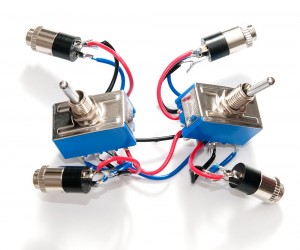 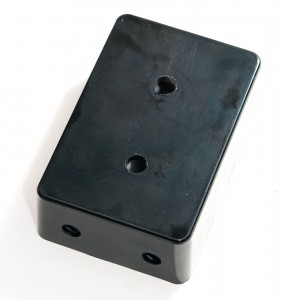 For the enclosure, I chose the smaller that would accommodate my construction. When drilling the holes, double-check first that your components will not overlap with other parts inside – I accidentally drilled the input holes in the first box too close to each other, and the switch would not fit between them. Also, if you choose a plastic container like I did (I didn’t want to risk short circuit with metal casing), do not drill too fast or you might melt a bigger hole than intended! 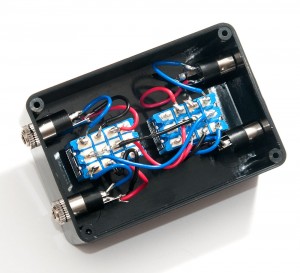 Assembling the case should be straightforward, although you might want to have a short mental excercise about how you are going to cram everything inside. I had some issues with the slugs and nuts of the switches getting out of their proper position when I already had attached the connectors, and as it was impossible to manipulate them back, I had to try three times before I managed to screw everything in place at the same time. 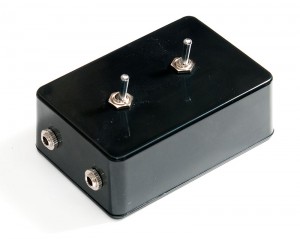 Once I had everything in place, the construction felt very solid, and sound wise I haven’t been able to tell the difference to my original setup without the switch. Being able to choose between two headphones and amps with a flick of a switch is a definite improvement. And I suspect that with $20 in parts and a bit of soldering, the quality is actually better than many $50-$100 switches you can buy from a shop (most of them made in China). With short wire runs and relatively simple electrical needs of headphones, I doubt human ears can hear the switch at all.

Usually, you should be able to tie all Ground connections together. This reduces the switching needs to two SPDT switches. Did you experience ground loops when you connected all grounds together?
(As a small side note: Your schematic is a bit misleading. Your jack symbol shows a mono jack with an internal switch instead of a stereo one. Check out http://en.wikipedia.org/wiki/Phone_connector_%28audio%29#Design)

I really like your site; the format, and the images are gorgeous. Beautiful work.

I don’t quite understand why you need two switches, as you basically need only swap the inputs and outputs every time you make a switch. So technically you only need one hardware switch to complete the operation, but I am not sure how the hardware can be designed in that way (perhaps a swap switch is needed).

I used to have both two audio sources (O2 Headphone amp and a tube amp) and two audio destinations (Audiotechnica and Beyerdynamic headphones). So I’d need one switch to switch between sources, and another to switch the destinations.

(theoretically you could wire the headphones in parallel, but if they differ a lot in their electrical characteristics, that would not be good)