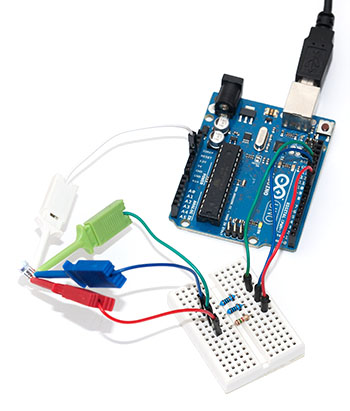 As a continuation to my Raspberry Pi and Arduino communication post, I thought I’d do the same but opposite way. This time, I thought it would be nice to make a proper Arduino library to make the process more streamlined.

To make communication more robust, I decided to implement a more formal communication over serial to enable applications that have some idea if a command sent to Arduino was successfully carried out or not, and also introduce basic error recovery if invalid commands or wrong number of parameters are received.

If you haven’t worked with Arduino libraries before, I suggest you to familiarize yourself with this basic tutorial or the other one at Arduino Playground. If you’re not familiar with AnalogWrite(), a quick peek to Arduino PWM Tutorial may also be in order.

I wanted to make a simple formal protocol to send commands and hex, byte or word-sized parameters related to that command over serial line to the Arduino. For the protocol, I had these requirements:

After some consideration, I chose to select non-overlapping sets of symbols from the ASCII character set for commands, parameters, control characters and success/error messages:

With non-overlapping characters used for different things, detecting errors in sent commands becomes easier, as any “non-expected” character marks an error situation and as status messages OK and RR do not appear in commands, implementing two-way communication (commands to both directions) is easy later on.

In the protocol, command letter is sent first, followed by any parameters in hex format (number of parameters can be anything from zero to arbitary high), and the sequence is terminated with newline. For example, a parameterless command ‘x’ would require sending “x\n”, and another command ‘y’ that would take two byte-sized parameters (two hex numbers each) could be invoked with “yABCD\n”, which would translate to y(0xAB, 0xCD) (note that most significant nibble is sent first, and parameters are sent in left-to-right order). If the command is received and executed successfully, “OK” is returned, and otherwise “RR” to indicate error condition. Note that neither status includes a newline.

On Arduino side, we need to first receive the command, then parameters, if any, acknowledge the newline sent, and finally check for errors (maybe there was invalid character received, or not enough parameters before newline, or too many) before executing the command and returning “OK” – or return “RR” if either parsing the command or executing it failed.

To make it easy for Arduino sketches to implement the protocol, I designed a simple wrapper library around the Serial package. It’s fairly straightforward: There is a initialization function that is called in setup() part of Arduino sketch, then a method to read (potential) command from serial, three paramXXX() methods to fetch parameters, and endCommand() method that fetches the newline after a command (or enters error state if something else is encountered). Finally, there is an error-checking function and two methods to send OK/error status over serial line.

Apart from constructor and destructor, the methods are introduced in the order they are usually called (relevant paramXXX() methods are invoked for each parameter, if any). There is also one private variable, nextCommand to store a potential command character during parameter gathering – this may happen if a command is called without enough parameters or without adding a newline to terminate the command correctly – in this case we don’t want to miss the next command also, and as there is no unread() in Arduino’s serial library, we’ll emulate it ourselves.

On the code side, the most important function is getCommand(), which does four things:

Because of this structure, getCommand() can be called in the loop() section of the Arduino sketch, and the method will effectively go through the bytes read from serial line until a valid command is encountered (recall that parameters, newline and status messages are not valid command characters in the protocol), so if there is “garbage” received before first valid command, that causes no problems.

After getCommand has successfully fetched a command and returned it, consecutive calls of paramXXX() methods can be used to fetch parameters for that command. Here’s the simplest of these methods, one that reads one hex character and returns it:

Notice how the method checks if the read character is actually a hex, and if not, how the character is stored in nextCommand variable. Note also that once that variable becomes nonzero, no reading is done from serial – effectively the library is leaving the serial data alone until getCommand() is invoked the next time, so one failed command does not prevent also the next command from being successfully parsed.

Other paramXXX() commands are essentially just chaining the paramHex() invocations. The method endCommand() is similar to paramHex(), but instead of a hex, it scans for either “\r\n” or “\n” – and if something else is received, that too is stored in nextCommand.

Because every time a command ends abruptly (not enough parameters, or a new command received before termination) or is too long (hex received where “\r\n” or “\n” should have been received), nextCommand is set to a nonzero value, so isError() method can just return that.

I named the library PiSerial, with the anticipation that I will later write a similar library for Raspberry Pi to communicate with it. Initializing the library only requires one parameter, the baud rate – here 9600 is used. Simple commands are used to make the library parse sent commands, parameters etc. and send success/error messages over serial line.

Here’s all code that is needed to make the Arduino respond to one command, “cN” where N is a parameter, and when it’s zero, the onboard Arduino LED (pin 13) is OFF, and when non-zero, ON:

Note that we are handling two special cases in the loop – a null command indicating that the library encountered an invalid command character (could be parameters of a previous command which was partially lost, a newline or invalid character), and “default:” section which sends error message for commands that are not implemented. You can upload the sketch, fire up Serial Monitor (Ctrl+Shift+M), make sure that you’ve selected “Newline” and “9600 baud” from the dropdowns in the bottom of the serial monitor window. Here’s an example session (I’ve used ‘>’ to mark things you type, and lines after show what Arduino responds and an explanation in parentheses – note that in actual session there are no newlines or the text in parentheses):

Quite nice! As you can see, the command parsing is quite resilient against most errors, and responds only to valid commands. And it’s extremely easy to extend the command set. I’ve prepared a complete zip file with another example sketch that assumes a RGB LED (with proper resistors) is connected to pins 9-11. Here’s a short example session on how to control that, too:

That’s all for this time, next post will discuss the RaspPi side library for communicating with Arduino. I suggest you to download the zip, unpack it to your Arduino sketches folder, read to code and try it out. If you want to make a new sketch using the library, just use Sketch -> Import Library functionality to import PiSerial to your sketch.

Interesting post – looks very promising. Are you thinking that this could be a replacement for pyFirmata? If so, would you think it would be quicker in terms of the communications between the Pi and Arduino?

Hello,
Thank you for your blog, I have learned a lot on stellaris PWM and other stuffs

I am trying to have PiSerial working, first on Stellaris LM4F and then on Arduino UNO without success.I havent’t changed anything but the LRD on Stellaris.. used newline on terminal .. I can’t have it working. I get RR everytime.
Regards
Bernard

Hello,
pardon .. everything is ok .. misreading the instructions.
Sorry
I am looking forward to reading the pi side :)
Regards
Bernard

No problem, great to hear you got it working!

Thanks! I hadn’t heard of the Firmata protocol or pyFirmata, but it seems to offer protocol similar to MIDI to access most functionality in Arduino. The main difference seems to be that Firmata has fixed function set and fixed firmware that implements it for Arduino, whereas mine is more of an open protocol, where user needs to define his own commands to suit particular application. Of course, one could throw away Firmata’s firmware and extend the command set to achieve similar results as the library covered here.

Regarding speed, Firmata seems to be a binary protocol and thus may be slightly faster (30 % less transmission overhead maybe?), but cannot be interacted with text terminal.

You should look at the CmdMessenger library and be done with the hard work!

My only suggestion is that the library is misnamed. It should be called something like ‘SerialShell’ to make it more clear for the user. When I first started I didn’t realise what the code actually did till I got to the end.

Doing the hard work is a nice learning opportunity. :) But you are right, the library you mention does seem to do pretty much the same thing (and perhaps with additional features, too).

Great article, simple and extendable.
Has the PI side of this protocol been completed?