I’m planning to make some RFID hacking in near future using 150 kHz tags. Since I don’t have a signal generator, I decided to go where quite many people have gone before and build myself one, more specifically a DDS. Instead of just taking a complete project from the net, I thought this would be a good way to learn a bit of AVR assembly programming, and manual D/A (digital to analog) conversion using R-2R ladders. Here’s what I built: 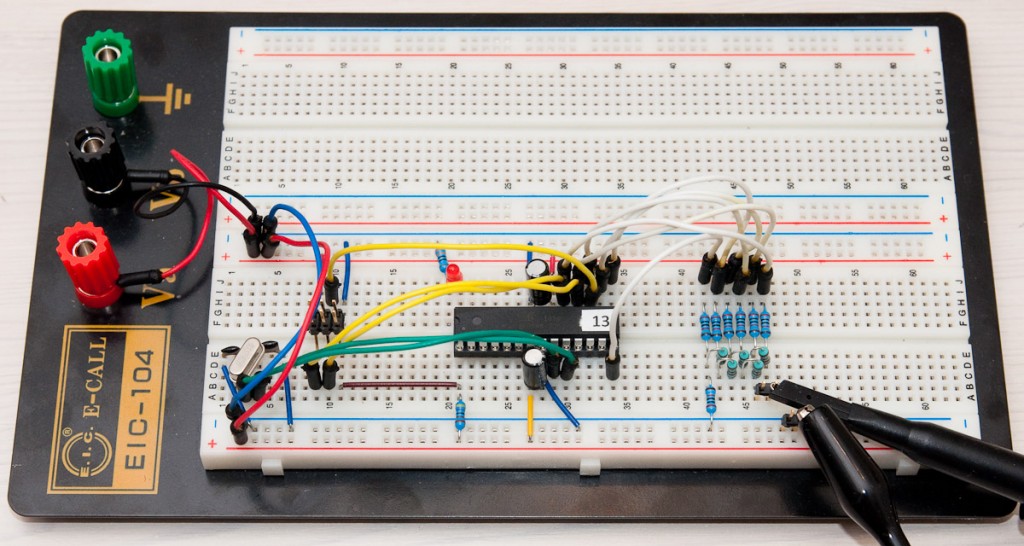 I’m skipping the schematic to save some time – basically it’s a ATmega88 with 6-pin programming header, power, a 16 MHz crystal (other frequencies also work, lfuse for this setup if 0xFF) and a red LED that is not used. The R-2R ladder is wired with white jumper wires to PB0-PB5 (it’s a 6-bit DAC) so that PB0 is the “least significant bit” and PB5 the most significant one. Read on for details.

If you want to check that it actually works, you can start with 1-bit version and easily see that when a_0 is 0V/5V, V_out is 0V/2.5V (5*(1-1/2^1)). If you derive a Thevenin equivalent circuit for this, you get one with 0/2.5V voltage source and 2R resistor in series. By adding another bit to this equivalent circuit, you can verify that the 2-bit version works also and it’s Thevenin equivalent resistance is also 2R – and by induction, you see that after any number of bits, the resistance stays at 2R and voltage is:

So with our 6-bit R-2R DAC, setting just PB0 will make V_out 1/64 of VCC. PB1 has twice that impact, PB2 twice more and so on, and finally PB5 contributes 1/2 of VCC to V_out. Effectively this means that the 6-bit binary value we write into PB0..PB5 is converted to analog voltage level, and we can generate a sawtooth wave with very short piece of code: 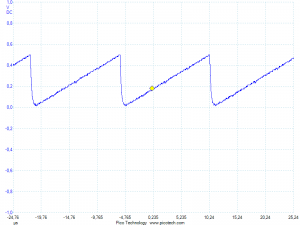 To make a sine wave, I have precalculated a 256-step table waveform[] that stays within 0..63 required by our application. Only other thing we need to change is the inner loop:

We can again confirm that this actually works:

Final step before diving into assembly version is to add a more fine-grained control over the frequency than just swapping a new crystal in place. This will be done using fixed-point arithmetic, where we have a 16-bit counter that will use upper byte for storing the integer part of waveform counter, and lower byte for fractional part. Here’s the inner loop refactored into a separate function:

Easiest way to understand the above code is to consider a few examples. Let’s say we use step value 256, i.e. 0x0100. Here are the first few iterations:

Wee see that the lower byte of counter works as a fractional part, “overflowing” to upper byte every second iteration, and causing the waveform to advance 1 step every other iteration. If we had used 1/4 * 256 as step value, we’d advance every 4th iteration. In general, with step value X the waveform will advance X/256.0 per iteration, allowing us 1/256th of a step resolution.

If we want to achieve a certain frequency, we need to calculate a correct step value for our function. When I compiled the function it turned out that each iteration took 11 clock cycles. If we advance the waveform by step/256 (i.e. by one if step=256) each iteration, the effective frequency would become (remember there are also 256 steps in the waveform):

Solving this for step we get:

If we want a 150 kHz signal, the step would be 6758, or 0x1A66. This can be confirmed with the oscilloscope, or if you don’t have one, a simple multimeter with frequency measurement functionality will do. Mine gave 149.9 kHz. The math works!

If you look at the output from our C function, you’ll notice it looks plain ugly. The reason is that in 11 clock cycles, we only have less than 10 samples on average per wave. This results in very jagged sine wave. By writing the loop in assembly language, this can be squeezed to 7 clock cycles per iteration, giving us over 15 samples per wave at 150 kHz. This is not too much but the output does become cleaner:

If you haven’t seen AVR/gcc assembler code before, here’s a short walkthrough:

If we would’ve wanted to return any values, that would be done using r24:r25, the same registers that are used to pass the first parameter to a function. The assembly function needs to be also introduced on C side of the code so the compiler knows what to expect:

With that done, we’re ready. Note that the 7 clock cycle inner loop is 22 % faster than Jesper Hansen’s DDS routine that is widely used in the net. This is achieved through using 16-bit (8.8) step value instead of 24-bit (8.16) one (-1 clock), and by using SRAM instead of program memory to store the waveform (-1 clock).

You can download the full project source with a makefile that you can use to compile and flash the project (make generator.flash). If there’s demand, I can also make a schematic, but the picture and schematic of R-2R ladder is probably enough for most.

I haven’t yet found any outstanding links on AVR assembler – I’ve coded a fair share of x86 assembly in my youth so ATmega88 data sheet’s instruction set summary combined with Jesper’s DDS code and code outputted by generator.c (gcc -S -O2 -mmcu=atmega88 generator.c) was just enough to create this article. The best one I found with quick googling was this:

A good summary on register use and calling conventions is available here:

I noticed that after my USB password hack, the number of subscribers passed the 100 mark. I would be interested to hear what kind of things you’d like me to cover in the future. So if you have a subject in mind you’d like to read more about, send me an e-mail at jokkebk … iki.fi or post a comment!

Nice your project very great and simple.I was looking how to make one myself,Very intructif. I just have one question how many bit is DDS that you design?

There’s a 6-bit R-2R bit currently, so if you do it that way you’ll have a 6-bit DAC. With AVR, you can easily add two more bits for an 8-bit one, but the R-2R bridge may not be that accurate unless you use very closely matched resistors.

Thank you for the answer.I am actually trying to build a DDS but i need 18 to 20 bit DAC so i am thinking of order a DAC from linear tehcnology to avoid inaccuracy.Thank you again .

The simplicity of your solution is much appreciated. There was another similar project published in Elektor Electronics Magazine that was part of a SDR series that you may find interesting. Unfortunately I forget this issue (Think it was in 2013)

Very nice and instructive, I like this very much and will certainly try your solution as I was thinking of using the SRAM as you did.
Thank you very much!