Immediately after soldering together my USB password thingy, my solder iron, the family heirloom Weller Magnastat stopped working. Some investigation showed that the base station was providing 24V AC voltage just fine, so I decided to unassemble the handpiece to see if something could be done. Here’s what I found: 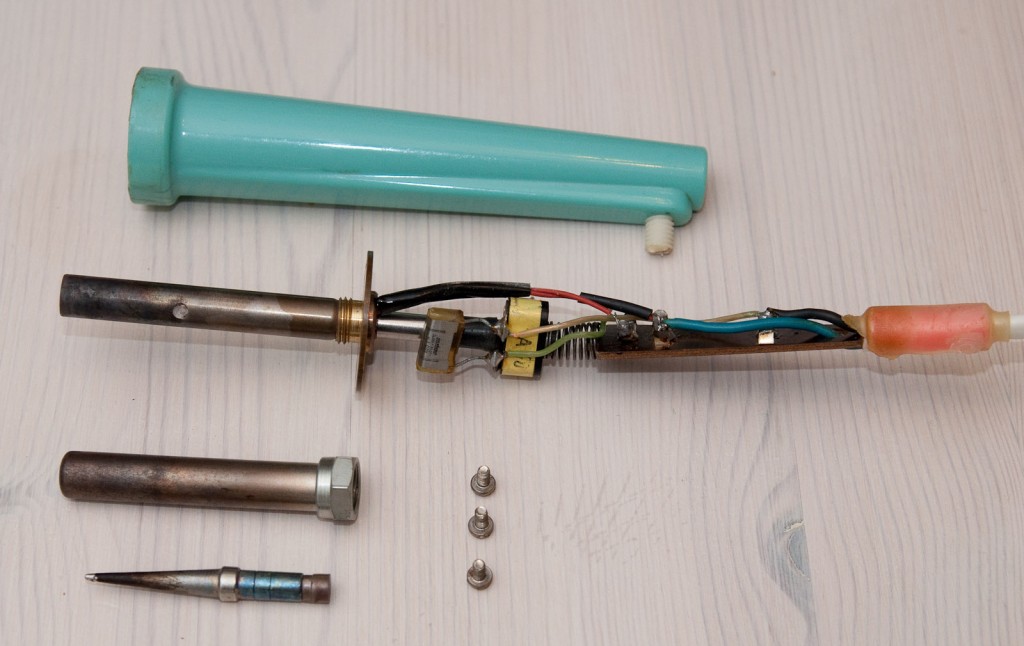 It turned out my iron was salvageable; read on to learn a bit about the Magnastat and how I was able to repair mine.

The construction of the device is surprisingly simple (see this image): The first (blue) wire from A/C power unit goes straight to the heating element (first red wire with black tube around it). The second (black) A/C wire goes through the magnastat switch (brown and green wires) and then to the second heating element wire (second red wire without the black tube). A capacitor is wired parallel to the switch. With limited A/C experience I’m not sure if it’s for blocking DC current, smoothing the switch action or letting a small amount of A/C current through.

A long tube goes “out” the handle part into the iron tip, and the tip is placed at the head. The hollow tube above the tip is then placed over the tip and screwed to the base of the main assembly to keep the tip snugly in place. Here’s a diagram of the inner workings, from Cooper Industries’ website:

If you read a bit about the Magnastat, it turns out the temperature-controlling part, the “magnastat”, behind the tip is magnetic below a given temperature, and loses its magnetic properties above that: Initially the magnastat pulls the switch closed via a mechanism inside the long tube, but once desired temperature is reached, the magnetic property is lost and the switch opens. Once the tip cools down a bit, switch is pulled closed again, and so the temperature stays regulated.

Note that in my model the tip and the magnastat are one solid piece (magnastat is in the base of the tip), newer models have a separate magnastat and tip, and you can change the target temperature just by changing the magnastat part.

In my case, the problem seemed quite clear once I tested the power cord with a multimeter: Blue wire did not conduct at all. However, the insides were not in the best shape and nothing guaranteed that it would work after I replace the cord. And in any case I would need a new iron to fix it. So it was a good opportunity to consider byuing a new iron.

Alternatives for a new solder iron

I quickly decided I’d rather continue with a well-known brand than buy any of the questionable, cheap “digital solder stations” they had in Finland. A new Weller was an obvious choice since Hakko and most other respected brands are hard to get here. But after some surfing it started to seem that I would either be getting an inferior product to the Magnastat (products below 150 €), or I’d need to spend 220-390 in a new Weller of equal or better quality.

When considering other brands, many options of about equal or at most slightly better quality seemed to exist. However, in most discussion threads there was always someone who stated that induction based OKi (formerly Metcal) stations were superior to “traditional” irons. Unfortunately, I would’ve needed to order one outside Finland and without additional research, I was reluctant to spend 300 € on “some model and a few tips for that”.

So when faced with the alternatives, I decided to get a new iron for my existing station – after all, if it turned out the problem was with the base station, I could just get a regular 24V AC, 50W power source (actually, some people suggested that even DC might work). After wiring it into the base station, it started warming up immediately and worked like a charm. For less than 100 €, I once again had an excellent iron in my hands. It was time to see if I could salvage the broken old one, too!

I first thought I’d just replace the long part of the cord, as that was the most likely place for a broken wire. However, it turned out that long part worked just fine, and it was the last 5 cm that had broken. Warming up my new iron, I desoldered the existing cord and soldered a new one in its place: 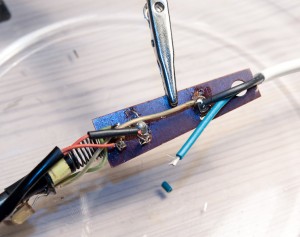 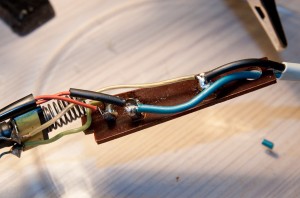 After reassembling the handle, I plugged it back in, crossed my fingers and turned the power on. A power meter showed same wattages as with the replacement iron, so everything seemed to work well. After a while, a familiar “click” could be heard and the power dropped, indicating that the thermostat had survived the power cord transplant. Apart from an initial burning smell (I probably dislodged some soot and dust) everything seemed to work perfectly, and I was able to solder just like before. However, I decided to store the old iron as a backup and continue to use the new one, as it uses the newer LT tips and has that nice “brand new” feel to it!

Hey, I have the same iron… but my base occasionally gives out… :P… at least this is an analog device and requires little digital knowledge, right?

Yeah, compared to debugging digital circuits it’s almost like a purely mechanical device, and simple one at that. :)

It would be interesting to try out the iron with a 3rd party 24V AC source, but unfortunately most inexpensive ones are not rated for 2A (or are rated exactly that; I’d think twice before trusting that it actually can handle that for longer periods of time…)!

Be aware that the Weller base station transformers have a fusible link wound inside the transformer windings. Any short on the output will rupture the link and render the transformer as scrap.
Regards

Thanks for sharing the information, that’s good to know!

Can you please help me out. I have this Weller MLR21 with 24v 25w. I don’t have the station for it but still I need to fire it up and use it. It has 5 wires namely red, black, blue, white and brown. I used it once but forgotten whic wires connected to the element,. I remember I had to short 2 of the remaining wires but can’t remember . Any help will be appreciated , feeling frustrated, I use magnum as a main soldering iron. Weller is a joke compare to these southAfrican products.

Sorry, I don’t know about the more complex than 2-wire Wellers. Maybe Google would have something, but it could be you need to fork cash for a new station. :(

Maybe this link can help you!
Look dokuments end and schetmatic and connector wiring.

Hi, Just came across this by accident.
The wiring described in “Magnastat Basics” is WRONG!
Quote: “Blue and black power wires are connected to the terminals of the yellow switch component with “A” in its marking. A capacitor is wired parallel to that.” If the switch could operate this would be a dead short! The correct way is one power wire goes to one leg of the switch. The other power wire connects directly to a wire from the element (heater). A wire then connects between the other side of the switch and the remaining wire on the element. There are connection points on the assembly to do the joins. For three wire irons the earth is connected to the element flange (usually). Sorry to sound “bossy” but connecting as described above may cost you a new triac or even a new transformer! Regards, Dave.

Thanks for pointing this out, for some odd reason I have described the connections differently than they actually are in the pictures. Of course the other A/C wire goes straight to heating element (1st red wire), and the other goes /through/ the switch to the heating element (2nd red wire). I will correct the text, cheers.

Hi there,
Having just had a study of my tcp,it would appear that the steel wire from the thermostat,that runs up the tube to the magnet has snapped in three places,due to corrosion.Has anyone successfully managed to replace this?.A replacement magnastat is now in the region of £50,so would like to revive the old one,where possible.
cheers to all !

Dear Friend,
The explanation is very understandable and simple, the thermostat part is rusted and broken, where can I have the replacement for the solder weller TCP-S 5 32 105 99 .
Thanks & Regards
safoor
From Mauritius

I think you might want to ask Weller or an authorized dealer that question, not me. :D

Very informative.. Thanks for sharing.. So how long did it last after the change?

It was working right until I bought a newer Weller unit to replace the old one. I’m still keeping the fixed one as a spare, I think it would’ve lasted a lifetime with my use. :)

Steve –
There is NO Thermo-couple or Thermo-stat inside the Weller TCP-serirs Magnetic Switch (SW-60 in North America).

It is a Simple Magnetic Switch. An internal magnet, a Spring Mechanism, and Brass Switch contacts at base (where you solder swutch wires).

Mr GB, I am sorry to contact you this way but I remember reading some of your great replies to Weller related issues on other sites. I am in the UK and it seems to me you would be the most experienced person to help me with an answer to a ‘simple’ question.
Which is: Is it possible to open the MT1501 soldering iron?
I contacted the main supplier here and got the usual bumph that a replacement was best!
The problem I have is that the cord has broken right next to the handle itself and cannot be ‘joined’. Your answer would be appreciated….your silence understandable. Thank you, Dave.

Thank you!
Thorough and detailed info!
I just noticed that my weller WTPC-S started working erraticly, warm, cool, warm, cool… looking at the components it seems slightly newer model, but the principle is the same.
Seems mine has lost some of its magnetic properties.

I have a weller pu-2d with TCP wand – have done research on what decides Temp max it reaches. Apparently this is totally decided by the tip that the user chooses to attach (ie their is a number stamped on each tip, indicating it’s governing max temp ) mine has a 7 chisel shape = 700degF . I’d like to use this iron for SMD components – can anyone suggest a tip for this?
Is this possibly with such an old Iron?